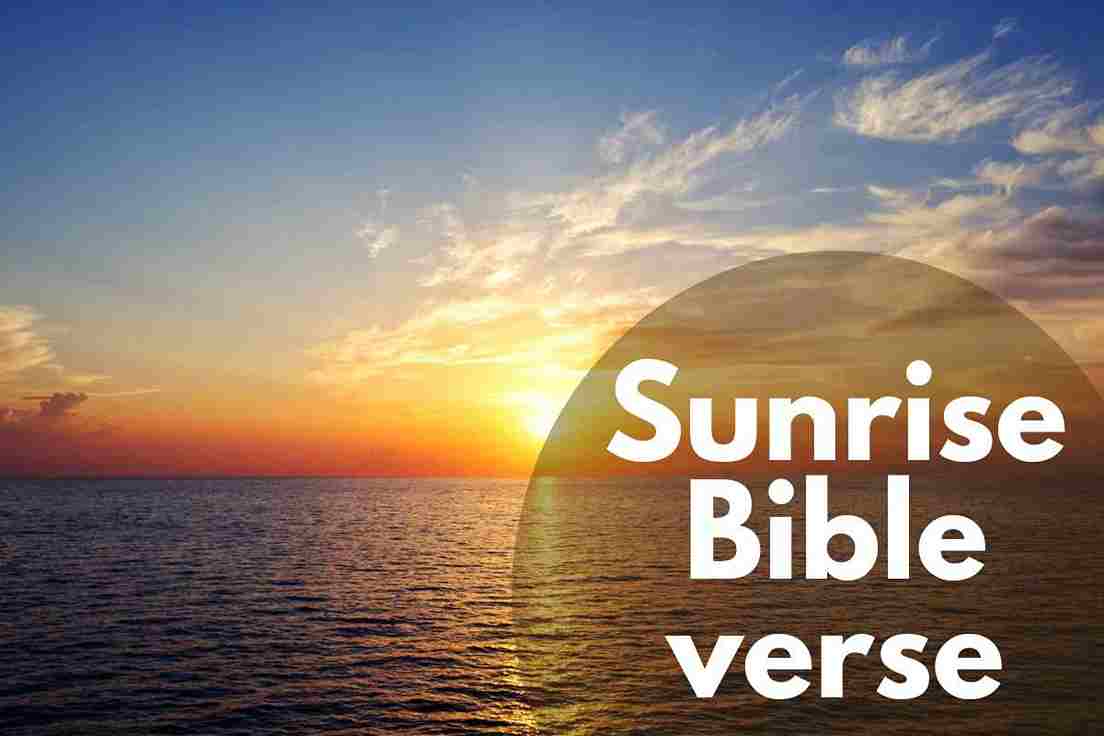 A few instances throughout the Bible’s sections describing daily life and worldly natural events are references to sunrise. The Bible frequently uses sunrise as a metaphor for beginnings and the beginning of new things.

Bible Verses about Sunrise are scriptural explanations of good things that will come our way. In reading these verses more on how to acquire good things will be revealed to you.

The Biblical meaning of sunrise can be seen as the ideal representation of God’s action in the world.

The physical and symbolic references to the natural cycle of day and night, as well as the beginning of something new and the appearance of God’s presence and light, are all part of the biblical meaning of sunrise.

Sunrise is also used symbolically in the Bible to represent the beginning or start of something new.

For example, John the Baptist’s father acknowledged the significance of his son’s birth at the time of his birth.

Zechariah had thought over the angel’s statement that he would have a son in his old age for nine months. He had remained silent the entire time Elizabeth was pregnant.

However, after John was born, he let his guard down and started singing. “And you, my child, will be called a prophet of the Highest,” he said.

For you will go on before the Lord to prepare the way for him, to give his people knowledge of salvation through the forgiveness of their sins.

Because of the tender mercy of our God, by which the rising sun will come to us from heaven to shine upon those living in darkness and in the shadow of death, and to lead our feet into the way of peace.” (Luke 1:76-79).

Those who have faith have witnessed God’s sunrise in every generation. Darkness is powerless over it.

The Lord’s name is to be honored from the moment the sun rises until it sets.

And as the sun rises, even on a clear morning, he will be like the morning light, like young grass that emerges from the ground after a rain.

And when the sun was going down, a deep sleep fell upon Abram; and, lo, an horror of great darkness fell upon him.- 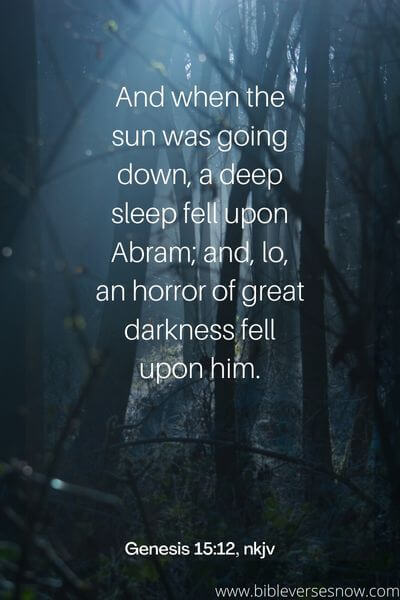 Abram had received a people and territory from God. Drought and strife had put Abram’s confidence in the promised country to the test, and his wife’s infertility had put his faith in the promised people to the test on a continuous basis.

In order to utilize Israel to create Jesus the Saviour, God primarily established the descendants of Abram as the country of Israel.

God made the nation of Israel out of the descendants of Abram primarily in order to utilize Israel to produce Jesus the Messiah.

And he lighted upon a certain place, and tarried there all night, because the sun was set; and he took of the stones of that place, and put them for his pillows, and lay down in that place to sleep.- 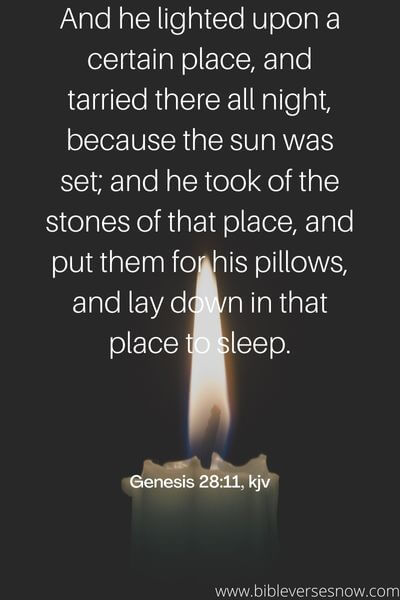 Jacob moved eastward toward the ancestral homelands of his mother Rebekah and grandpa Abraham.

Being exhausted from his journey, even though he had no other bed than the earth, a stone for a pillow, and the open heaven as a canopy or curtain a different kind of lodging from what he had been used to in his father’s house.

With his mother’s indulgence, one might wonder how he could sleep in such conditions and why he did not catch a cold after such a journey.

Then, while using a stone as a pillow in this barren desert, Jacob experienced a profound dream.

Jacob must be experiencing a bizarre avalanche of emotions right now, including dread, loneliness, isolation, exhilaration, and anticipation.  In Jacob’s life, this was a crucial period.

And he dreamed yet another dream, and told it his brethren, and said, Behold, I have dreamed a dream more; and, behold, the sun and the moon and the eleven stars made obeisance to me.- 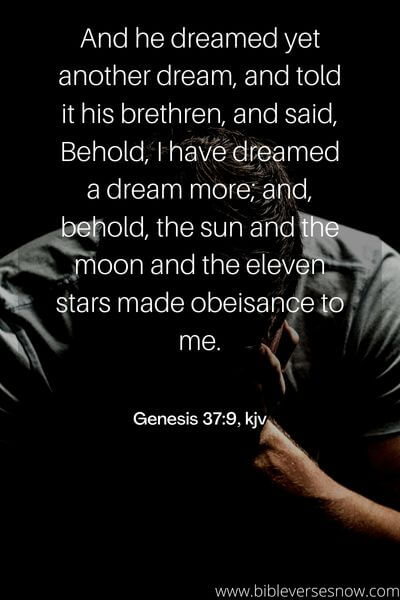 In this line, Joseph is relating to his brother a dream he had in which he was being worshipped by the sun, moon, and eleven stars.

This dream is noteworthy because it was later explained to indicate that Joseph will one day rule his siblings and be a leader.

The eleven stars stand for his brothers, and the sun and moon for his mother and father.

And on the east side toward the rising of the sun shall they of the standard of the camp of Judah pitch throughout their armies: and Nahshon the son of Amminadab shall be captain of the children of Judah.- 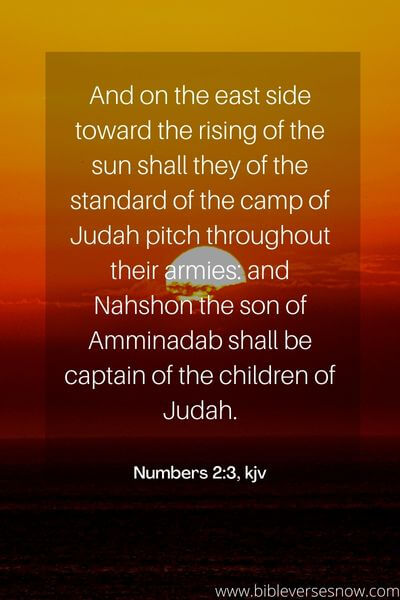 On each of the four sides of the tabernacle, there were four groups of three Israelites each.

The senior tribe in each of these four groupings was represented on the flag. Judah’s flag flew above the group on the eastern side.

The tabernacle was to be in the middle of the tribes, where they were to camp. It served as a reminder of God’s kind assistance.

However, they were to set up camp a distance away from the sanctuary out of respect for it.

And lest thou lift up thine eyes unto heaven, and when thou seest the sun, and the moon, and the stars, even all the host of heaven, shouldest be driven to worship them, and serve them, which the LORD thy God hath divided unto all nations under the whole heaven.- 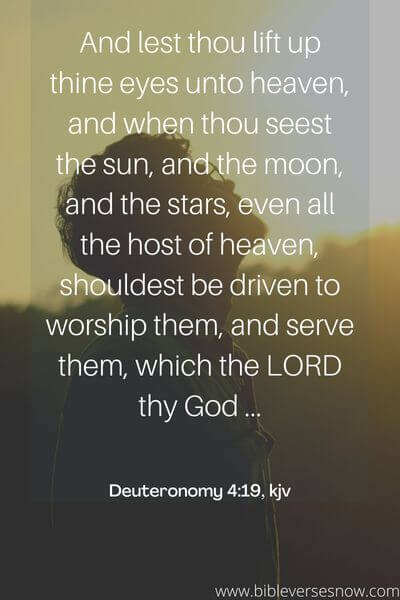 He will come to us like the winter and spring rains that water the ground, appearing as definitely as the sun rises.

Sunrise as the sun first begins to rise in the sky in the morning. Sunrise can represent new life, fresh starts, or the beginning of a new period or chapter.

2. Let the LORD’s name be blessed from now until forever from now!

3. From sunrise to sunset, let the LORD’s name be praised!

Every sunrise serves as a reminder of God’s boundless love and unwavering faithfulness. From sunrise to sunset, praise him!

He is exalted above all peoples, for no one is equal to the great and exalted God and the sky cannot contain the glory of him.

The Mighty One, God, Yahweh, summons and communicates to the land.

From the rising of the sun to its going down The LORD’s name is to be praised.- 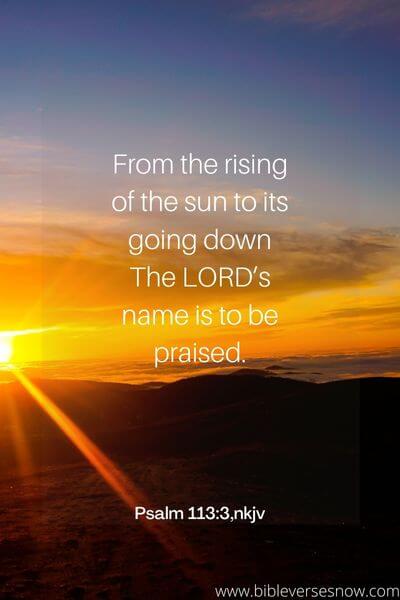 According to a recent Pew Research Center demographic survey, Christians continued to be the largest religious group in the world in 2015, accounting for over a third (31%) of the planet’s 7.3 billion inhabitants.

The psalmist wrote that From the rising of the sun to its going down The LORD’s name is to be praised, by all creation.

In other words, we are to praise God from the minute we wake up to the last thought before we go to bed.

And he shall be like the light of the morning when the sun rises, A morning without clouds, Like the tender grass springing out of the earth, By clear shining after rain.- 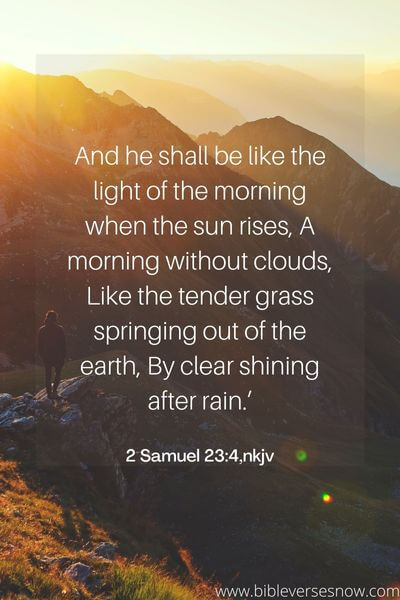 In this verse, David is compared to a dawning light that gets stronger until it is fully daytime because he is righteous and right.

David is portrayed as a leader who gives the populace hope and righteousness, and his influence and leadership are seen to be growing and strengthening with time.

The Revelation of Jesus Christ, which God gave Him to show His servants—things which must shortly take place. And He sent and signified it by His angel to His servant John.- 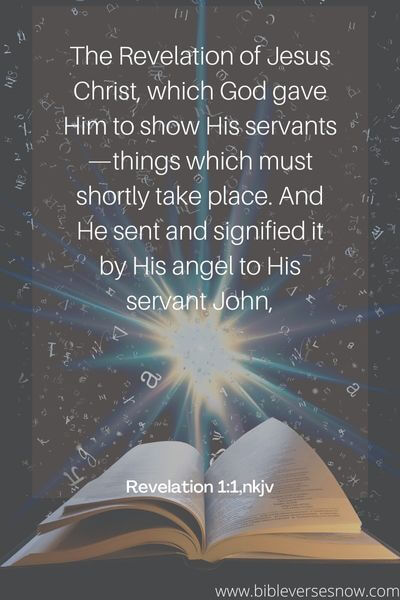 Greek term apokalypsis, which means “a disclosure” or “an uncovering,” is the source of the English word “revelation.” One reason we use the term “end of the world” events is because of its relationship with John’s description of the end times.

In Revelation 1:1, a vision of the Lord Jesus Christ describes the reveals of various facets of the Savior’s authority and eternal purpose, including the consoling knowledge that the Lord works alongside and among His obedient servants.

And take heed, lest you lift your eyes to heaven, and when you see the sun, the moon, and the stars, all the host of heaven, you feel driven to worship them and serve them, which the LORD your God has given to all the peoples under the whole heaven as a heritage.- 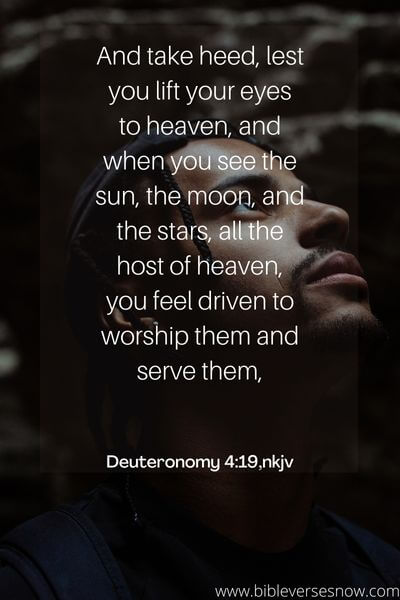 Given the numerous temptations we face and the evil impulses we harbor inside our hearts, we have a tremendous need to guard our hearts with all due attention.

While our obedience cannot save us individually, it is the sole sign that we have received God’s gift of everlasting life through Jesus Christ.

Those who walk recklessly are unable to walk properly. Moses specifically warns against idolatry as a sin.

The first kind of idolatry was the worship of celestial bodies.

People who did not know the true God were persuaded to believe that the sun, moon, planets, and stars were not only self-existent but also responsible for all of humanity’s blessings.

That you may be sons of your Father in heaven; for He makes His sun rise on the evil and on the good, and sends rain on the just and on the unjust.-

God is the Lord of all creation, and being a Father to those who have accepted His son Jesus Christ does not have partiality in Him.

Whosoever calls upon the name of the Lord shall be saved. Both the good and the evil individuals in the world are loved by God.

Jesus provides one piece of evidence: Regardless of who they are or what they have done, God makes the sun rise and the rain falls on everyone.

Let us know, Let us pursue the knowledge of the LORD. His going forth is established as the morning; He will come to us like the rain, Like the latter and former rain to the earth.-

The secrets of the Lord can not be found on the streets, in the open. It is them that diligently seek Him.

The Bible narrates that Jesus after His baptism went up to the secret place to pray. Which was ultimately a habit. He diligently did seek the Father, and we must follow suit!

When the Sun’s top rim first shows above the horizon in the morning, it is known as sunrise (or sunup).

The phrase can also be used to describe the full event of the solar disk crossing the horizon and its associated atmospheric consequences.

O LORD, be gracious unto us; we have waited for thee: be thou their arm every morning, our salvation also in the time of trouble.-

This is a prayer of the church being persecuted by the antichrist, pleading for God’s love and favor in their wretched and distressing situation, and asking for his gracious support, help, and rescue.

They prayed to the Lord to be merciful as they saw the ruthless and destructive Assyrian army move closer to Jerusalem.

They had anxiously waited in trust for the Lord to step in and use His mighty arm in a fresh, live way to pierce the blackness of night at the crack of dawn.

Isaiah 33:2, Says that the lord is our hope and that even in our worst hours, he still remains our refuge and our strength.

Cause me to hear thy lovingkindness in the morning; for in thee do I trust: cause me to know the way wherein I should walk; for I lift up my soul unto thee.-

Lord, my God, I pray that I experience your love today. Please help me to have more faith in you and to follow your instructions at all times.

David gained a great deal of knowledge about the Lord over his lifetime, and one of the most significant lessons he learned was that no matter how difficult his issues were, how mountainous they were, or how ferociously the enemy pursues us, God is always there to aid and protect us.