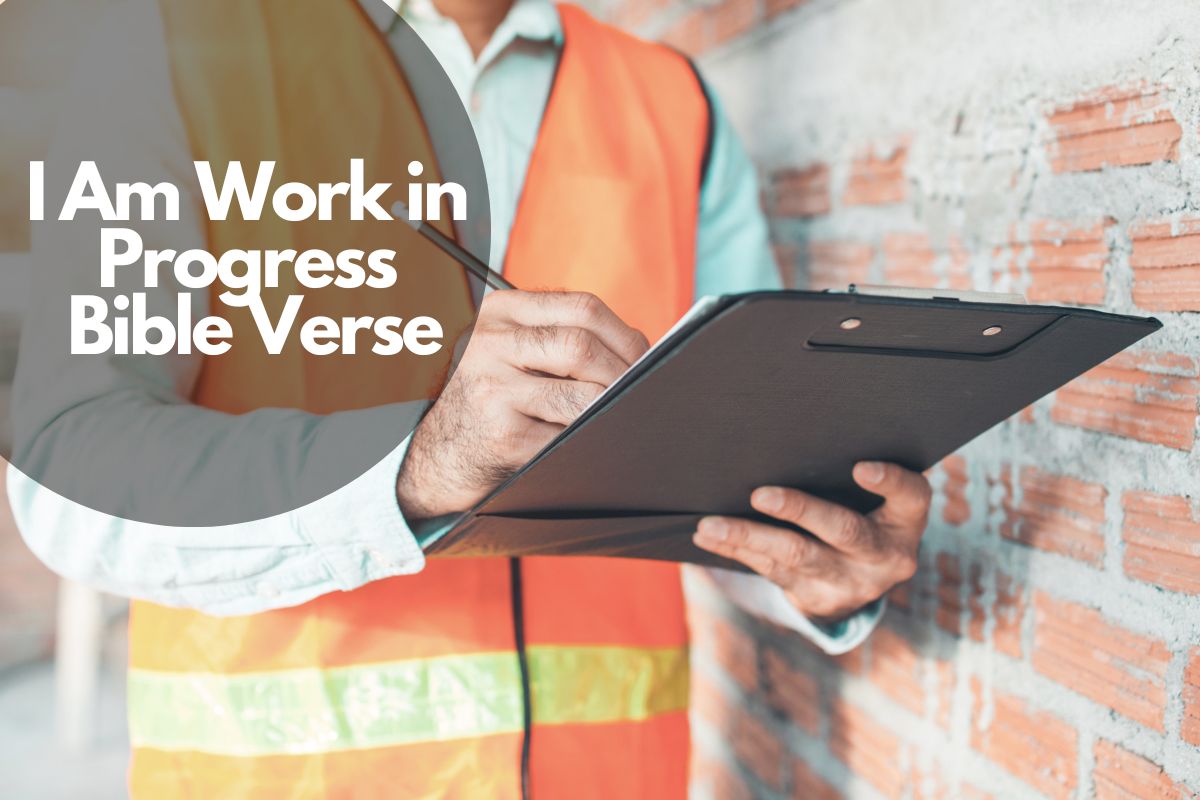 I am work in progress bible verse

Work-in-progress means an ongoing development or addition to an incomplete project. When major infrastructural constructions are ongoing, you’d likely see a billboard-lettered “men-at-work’.

This means until the project is done the billboard will not be removed.  Assets that need enough time to finish the manufacturing process are referred to as “work in progress,”. The Bible specifies that we are His workmanship and the apple of His eyes and that He knew us right from the womb.

I am a work in progress means I am under grace and God’s love right here on earth, and until I fulfill my purpose; I am not done.

I Am Work in Progress Bible Verse

We must always strive to “grow in the grace and knowledge of our Lord,” never content to stop at any self-declared peak of spiritual achievement. We are a work in progress throughout our sojourn on earth.

Being confident of this very thing, that he which hath begun a good work in you will perform it until the day of Jesus Christ:- 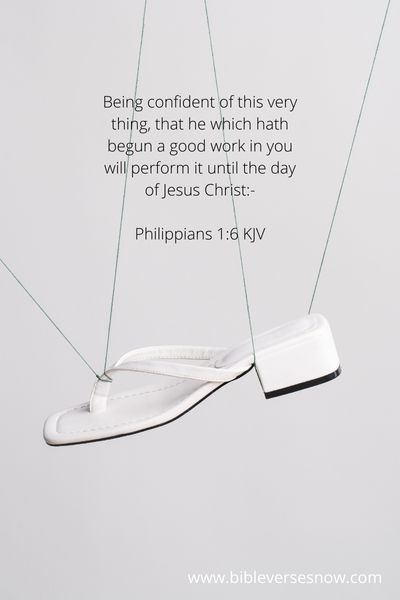 Being assured/confident  – This is a powerful word. It implies being completely and firmly convinced. Good work does not relate to the deeds that Christians perform in their daily lives. It alludes to the excellent deed mentioned by Paul in the preceding verse whilst he was giving thanks for their fellowship.

In Paul’s letter to the church, he expresses his gratitude for the gifts they have sent him. He also prays that they will learn how to act towards one another with genuine love. Their lives will be filled with truly good qualities and will be pleasing to God.

Bible Verse on God Working Through Us

We are a chosen generation called forth to show His excellence. Not as though We had already gained anything or were already flawless, but we go on in order to understand what we have understood of Christ Jesus.

If ye abide in me, and my words abide in you, ye shall ask what ye will, and it shall be done unto you.- 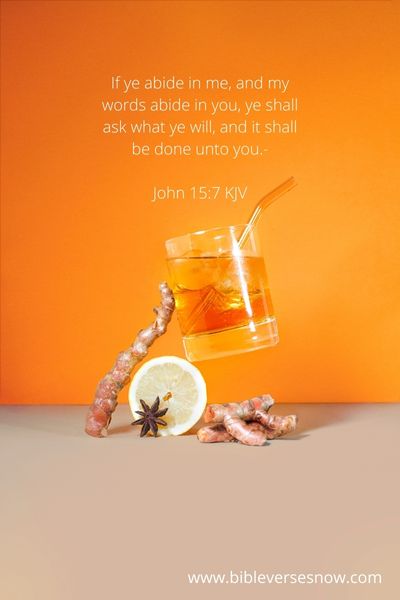 At the Last Supper, Jesus gave His apostles his farewell sermon, which is included in this passage. Most academics concur that Jesus spoke these statements while the apostles gathered in the Upper Room toward the conclusion of the Last Supper.

As a branch is tied to its vine, so must we be connected to Jesus in order to stay in Him. We establish this relationship by letting the Bible, which is His word, direct our thoughts and deeds. When we accept Jesus’s commands, His message takes root in us, and we believe it, we are connected to Him.

‘…and my words abide in you’- It implies that His teachings serve as our continual road map and watchword. His word will mold our thoughts, words, and deeds so that we produce fruit when it resides in our spirit, mind, and body. This implies that we shall have a Christian outlook on life, as well as a Christian temperament and way of speaking.

Our prayers will be in line with God’s will if we abide in Jesus and His words abide in us. We shall praise God by making requests that are appropriate for us. Our prayers won’t be for our own benefit; instead, they’ll help God’s kingdom grow.

Bible Verse Complete a Good Work in You

Leaving on earth means working toward =s giving God the glory. Giving glory back to God is by letting Jesus who is the author and finisher of our faith to complete His work in us.

Being confident of this very thing, that he which hath begun a good work in you will perform it until the day of Jesus Christ:- 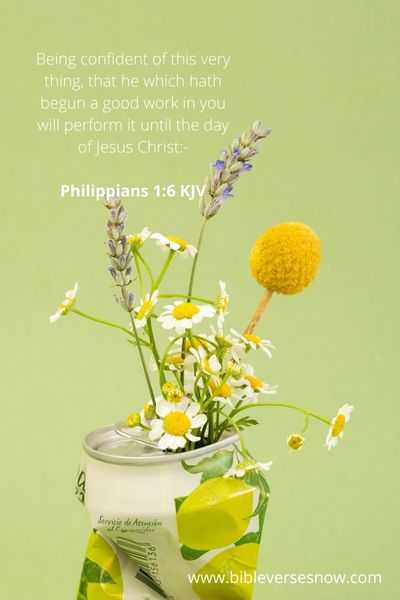 Paul thanks the church in his letter to them for the gifts they’ve sent him. He also hopes they will learn how to treat one another with sincere affection. Their lives will be characterized by really admirable traits and will please God. Being certain or confident is a strong term. It suggests having a solid and thorough conviction. The actions that Christians take on a daily basis are not good works. It refers to the admirable deed that Paul recounted in the verse before it as he was thanking them for their friendship.

What Does the Bible Say About Progress?

To progress means to move to the next level which is possibly more advanced than the previous. For the path of the righteous shines brighter and brighter until a perfect day.

Therefore leaving the principles of the doctrine of Christ, let us go on unto perfection; not laying again the foundation of repentance from dead works, and of faith toward God- 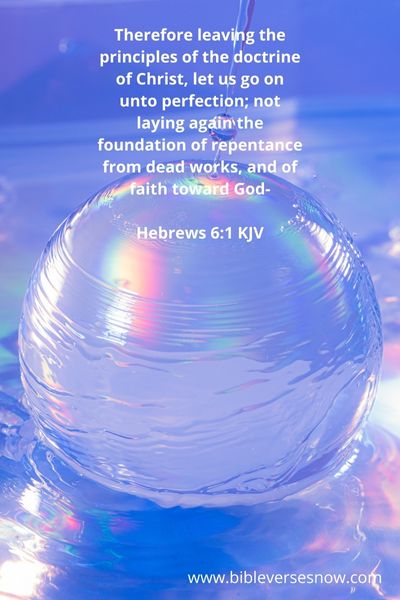 The Book of Hebrews offers broad guidance on avoiding false religion and tackles the issue of immaturity among Christians who had previously observed Jewish rituals. These Christians were still infants in the faith and sluggish to learn, even though they should have been at a higher level of development, to the point where they should have become instructors themselves. Hebrews’ author exhorts these believers.

These believers needed to go from their initial emphasis on the “basic doctrines” of the religion to spiritual maturity.

The actions taken by persons who are separated from the life of God constitute the dead works. Even if these works have religious inclinations, they are “dead” in the sense that they cannot revive the spiritual life nor could they withstand fire.

Such deeds may seem righteous and even really religious, but they lack a foundation in Christ-belief or a love for God, rendering them ineffective for salvation and eternal life. It is referred to as an “elementary doctrine” of Christ since repentance of one’s own actions is a prerequisite to faith in Christ or the doctrine of salvation.

What Does God Say About Going to Work?

Both Joseph, Jesus’ foster father, and Jesus himself were carpenters. God the creator toiled six days to create the world. Success comes from hard effort and determination, but the road to getting there isn’t always smooth or obvious. This is just a part of life, but the Bible is here to guide and motivate us during even the toughest of times. Being made in God’s image as a Creator, we are programmed with a desire to work in addition to the fact that he has commanded us to do so.

That I may know him, and the power of his resurrection, and the fellowship of his sufferings, being made conformable unto his death;- 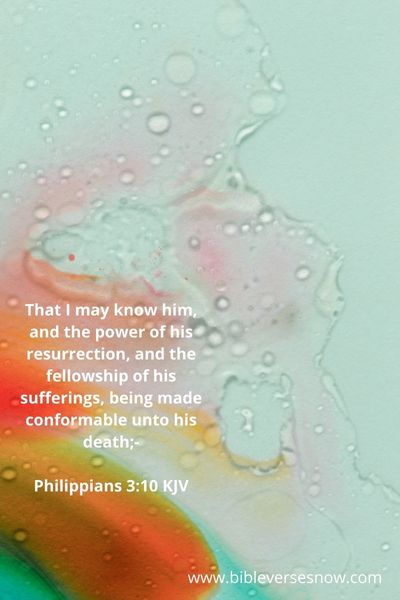 Paul emphasizes the value of experiencing “His sorrows” with Him. Many Christians overlook this quality because they think their religion frees them from suffering. Modern motivational speakers who employ biblical vocabulary in their talks frequently propagate this incorrect message. Paul and the other members of the early church understood that following Christ meant experiencing both his pleasures and his sufferings. This occasionally entails pain. Despite living a life of loyal service to Christ, Paul himself experienced suffering.

What Does The Bible Say About Working Through Hard Times?

A hymn called “It Is Well With My Soul” was written by Horatio Spafford and was musically created by Philip Bliss. This hymn was written after traumatic events in Spafford’s life. His four-year-old son’s passing and the Great Chicago Fire of 1871 were the first two. Later, while he was delayed on work related to zoning issues resulting from the Great Chicago Fire, he sent the family ahead. All four of Spafford’s daughters perished as the ship sank quickly while traveling across the Atlantic Ocean following a collision with another ship, the Loch Earn. His wife Anna lived and sent him the now-famous telegram with the subject line, “Saved alone.” Whilst he went to meet his wife, and as his ship passed where his daughters died, he hath an inspiration to write.

God is quite familiar with us. He is aware of our worries and anxieties. He is aware of our humanity. God nonetheless frequently reminds us not to be afraid. To be fearless is to trust God rather than think that our current circumstances are larger than God. We should put our faith in God. to have faith that he will always be sufficient. Bible researchers say that there are 365 ‘fear nots’ in the Bible. Meaning one ‘fear not’ per day. When it seems all hope is gone remember that in everything give thanks for he is the author and finisher of our faith.

What Does The Bible Say About Working Under Pressure?

What Does It Mean to Work Under Pressure? Working under pressure requires managing restrictions that are frequently out of your control. In both their personal and professional lives, pressure is something that everyone must contend with.

-Have not I commanded thee? Be strong and of a good courage; be not afraid, neither be thou dismayed: for the Lord thy God is with thee whithersoever thou goest.-

Joshua’s leadership of the Israelites as he led them into the Promised Land was the subject of the promise in this text. which was after Moses’s demise. Joshua was tasked with the enormous job of guiding the entire people into new territory. Joshua’s position as God’s chosen leader was bolstered by God’s words of encouragement and fearlessness. Although God’s promise to remain with Joshua was unique to him, the general idea still applies to us today. God demands that His disciples live bold, brave lives first. But, what audacity? On the grounds that God says we should fear not.

The Bible says in this world we will see tribulation but cheer up for we are more than conquerors through Christ. The Bible is saying that we should put all our trust in the Lord. My spirit is gladdened by your comforts as I have a lot of thoughts inside of me.