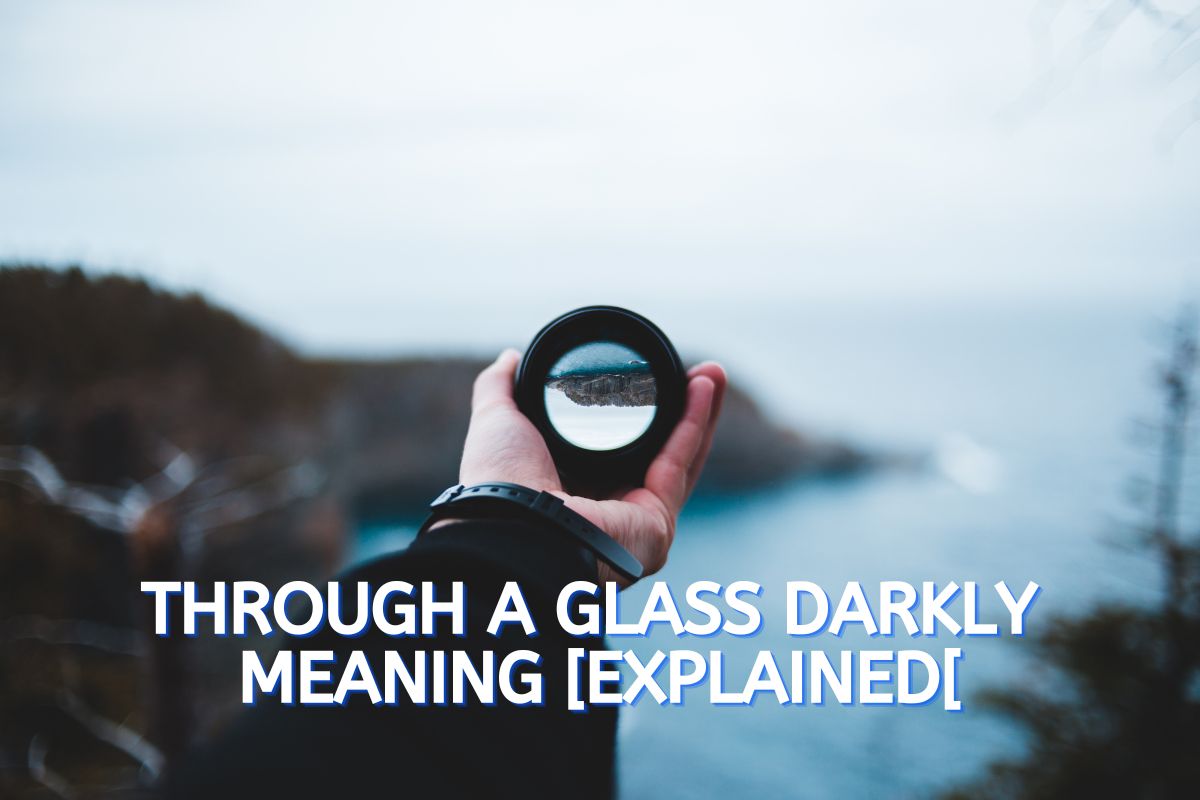 To “see through a glass, darkly” is to have a distorted or incomplete perception of reality. The phrase is taken from the teachings of the Apostle Paul, who emphasizes that while we do not currently see clearly, we will do so at the end of time.

Through a glass darkly meaning.

Sometimes a modern concept can interfere with the intended biblical message. Anyone who wants to see a solar eclipse is advised to watch it through a piece of almost impenetrable dark glass. Otherwise, the intense brightness of the sun will damage the eyes. This brings to mind the terror experienced by Isaiah after he saw a vision of the Lord.

Then said I, Woe is me! for I am undone; because I am a man of unclean lips, and I dwell in the midst of a people of unclean lips: for mine eyes have seen the King, the LORD of hosts.

Through a glass darkly bible verse

For now we see through a glass, darkly; but then face to face: now I know in part; but then shall I know even as also I am known.

What does this mean? How does one see through a mirror?

The word glass (or more appropriately, looking glass) is found only once in the Old Testament, in the book of Job:

Hast thou with him spread out the sky, which is strong, and as a molten looking glass?

In the New Testament, the word “glass” is translated from the Greek word esoptron. This is the word used in 1 Corinthians 13:12, and means a looking glass or mirror. Paul was not speaking of looking through a darkened piece of glass. He spoke of seeing a reflected image. This concept is established in the book of James where the phrase “beholding as in a glass” comes from the Greek verb katoptrizomai meaning “to look into a mirror.”

For if any be a hearer of the word, and not a doer, he is like unto a man beholding his natural face in a glass:

It is interesting to realize that no person ever sees his face. What he sees in a mirror is a backward reflection. A portrait painting or a photograph is not backward, but it is still only a two-dimensional image. A sculpture has three dimensions but produces a likeness with no counterpart in real life. A sculpture is an image of an object frozen in a moment.

The book of Revelation speaks of glass (as opposed to a looking glass) “like unto crystal” in describing the throne room of God.

And before the throne there was a sea of glass like unto crystal: and in the midst of the throne, and round about the throne, were four beasts full of eyes before and behind.

Revelation 21 speaks of transparent glass, glass that can be looked through.

And the building of the wall of it was of jasper: and the city was pure gold, like unto clear glass.

And the twelve gates were twelve pearls; every several gate was of one pearl: and the street of the city was pure gold, as it were transparent glass.

But to reiterate the point, the glass spoken of in 1 Corinthians 13 is not transparent; it is a reflective mirror.

The biblical expression “dark saying” is another phrase easily misinterpreted. A dark saying is not sinister. It is a saying with a hidden meaning. Once the meaning is revealed, it is no longer dark. All parables are “dark sayings” until they are interpreted.

I will incline mine ear to a parable: I will open my dark saying upon the harp.

I will open my mouth in a parable: I will utter dark sayings of old:

To understand a proverb, and the interpretation; the words of the wise, and their dark sayings.

Jesus told his disciples the reason he so often spoke in parables:

10 And the disciples came, and said unto him, Why speakest thou unto them in parables?

11 He answered and said unto them, Because it is given unto you to know the mysteries of the kingdom of heaven, but to them it is not given.

13 Therefore speak I to them in parables: because they seeing see not; and hearing they hear not, neither do they understand.

A saying is no longer dark once God illuminates it.

The entrance of thy words giveth light; it giveth understanding unto the simple.

“I See Men As Trees, Walking”

Mark 8 tells the story of the two-part restoration of sight to a blind man.

22 And he cometh to Bethsaida; and they bring a blind man unto him, and besought him to touch him.

23 And he took the blind man by the hand, and led him out of the town; and when he had spit on his eyes, and put his hands upon him, he asked him if he saw ought.

25 After that he put his hands again upon his eyes, and made him look up: and he was restored, and saw every man clearly.

Christians see like the blind man after Jesus ministered to him the first time. He saw men as trees walking. Christians see, but their spiritual vision is far from complete. When Christ returns, he will fully open man’s spiritual eyes.

For the time being, a Christian’s spiritual eyesight is limited. He cannot see afar off. He cannot comprehend the deep things of God. He is like a man looking at the universe through a telescope. He sees only a two-dimensional reflected image of an isolated portion of what is there.

Looking Through a Mirror

Ever since Isaac Newton invented the reflecting telescope in 1668, most telescopes rely on mirrors to produce an image of what is far away close to the eye. The image is far from perfect; because the image is two-dimensional, everything is flattened. A telescope gives an extremly limited and somewhat distorted view of the vast universe.

Today even the most devout Christian can only see an obscure image of Christ (and himself) as reflected in his holy Word. This image is further distorted by man’s limited understanding. But the day will come when man will no longer see Christ through a looking glass. He will see him face to face!

For now, we see through a glass, darkly; but then face to face: now I know in part; but then shall I know even as also I am known.