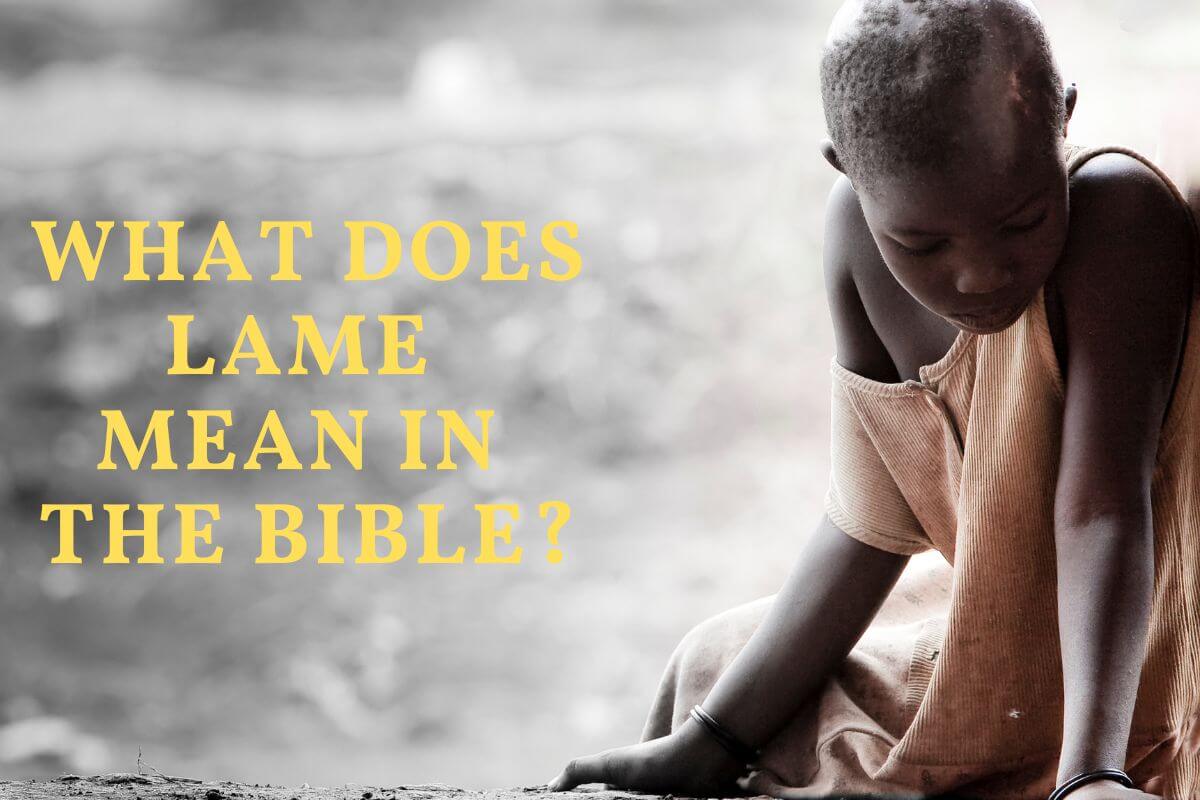 What does lame mean in the Bible?

Have you ever come across a question like; What does lame mean in the Bible? lame means difficulty walking brought on by the feet or legs. A particular kind of asymmetric gait anomaly is limp. Limping may be brought on by discomfort, a lack of strength, a neuromuscular imbalance, or a structural anomaly. Physical trauma is the most frequent underlying cause of a painful limp.

What does lame mean in the Bible?

A physical handicap prevents a person from walking normally. Lameness dates back from birth because of congenital deformities but in most cases, lameness is caused by accidents or diseases.

Speak unto Aaron, saying, Whosoever he be of thy seed in their generations that hath any blemish, let him not approach to offer the bread of his God. For whatsoever man he be that hath a blemish, he shall not approach: a blind man, or a lame, or he that hath a flat nose, or any thing superfluous-

In the time of Aaron’s priesthood, a lame person who was a descendant of Aaron could not serve in the temple but was allowed to eat from the table from the things provided for the priesthood for their sustenance. Verse 28-19 clearly stated “For whatsoever man he is that hath a blemish, he shall not approach, a blind man, or a lame, or he that hath a flat nose, or anything superfluous, Or a man that is broken footed, or brokenhanded. verse 21 says that such man shall not come nigh to offer the bread of his God. Deuteronomy 15:21 confirms this.

We can see that God sets a high standard of physical fitness for His priesthood. In the Bible, there were those who were paralyzed in speech and in action as it is today.

The biblical name is similar to mute in that they can see and hear the truth and can even confess it but they are paralyzed from acting on it.

What is the meaning of the word lame?

Lame means being crippled or disabled in a limb or otherwise injured so as to be unsound and impaired in strength; as a lame arm or leg, or a person lame in one leg.
It can as well be described as imperfect conditions of life, not satisfactory, weakly, poor, unsteady, ineffective, someone with poor social skills, and a feeble person.

Also, a lame can be someone who is unable to walk without difficulty as the result of an injury or illness affecting the leg or foot. Moving with pain or difficulty on account of injury, defect, or temporary obstruction of a function. Someone who is unconvincing, pathetic, and inadequate, or giving excuses.

When describing something, for example, an excuse, argument, or remark, as lame, it means that it is poor or weak. For example, he mumbled some lame excuse about having gone to sleep. All our theories sound pretty lame.

What makes a person lame?

Here, I must start by saying that being physically lame is not a choice. It can happen or cause by situations in life, the condition one finds herself may be through accident, birth, and by time.

Lame by accident is caused by an outside force.- example the case of Mephibosheth. Most accidents do not just happen there are caused by carelessness.

The blind receive their sight, and the lame walk, the lepers are cleansed, and the deaf hear, the dead are raised up, and the poor have the gospel preached to them.-

Lame by birth: Some people are born lame like the man at the beautiful gate. Lame by time: These are lame and are worn with age. Their morning vision has failed them and they believe somehow that life is over.

And in the other way being lame spiritually is a choice or an opinion. Meaning one decides to be lame or an opinion another has on someone.

One can decide to be lame in the following ways:
Being noisy, smoking, telling lies, improper dressing, talking anyhow, not owing up to one mistake, stealing, killing a fellow human, addressing people by what they are not, blaming others for their mistake, telling people that things are not under their control and bragging about self achievements when actually so many people out there are higher, greater and have achieved so much than them.

The book of Mathew 11:5 confirms that Jesus healed those with different sicknesses including people who were lame. They walked.

Lame man in the Bible

When Jesus saw him lie, and knew that he had been now a long time in that case, he saith unto him, Wilt thou be made whole?-

One day Jesus reach out to him at the same pool and asked him “wilt thou be made whole” he answered sir I have no man when the water is troubled, to put me into the pool. And verse 8 says Jesus said unto him “Rise, take up thy bed and walk”. Immediately, the man was made whole. He took up his bed and walked.

Another record of a lame man is recorded in the book of Act 3. His name was Levi, he had a particular station at the beautiful gate to which he is brought each day to beg for arms/money. And when he saw Peter and John he begged for arms as a routine form Peter and John. But Peter only gave him what he had which was far greater than money and that was the authority and power that is in the name of Jesus Christ (Act 3:6-8).

Then Peter said, Silver and gold have I none; but such as I have to give I thee: In the name of Jesus Christ of Nazareth rise up and walk. And he took him by the right hand and lifted him up, and immediately his feet and ankle bones received strength. And he leaping up stood, and walked, and entered with them into the temple, walking, and leaping, and praising God.
Yes, at that moment the man’s legs were strengthened and he began to walk for the first time in his life. Praise God.

And there sat a certain man at Lystra, impotent in his feet, being a cripple from his mother’s womb, who never had walked:-

The Bible records that there was a certain man at Lystra, impotent in his feet, being crippled from his mother’s womb who never had walked.
He heard Paul speak and preach the gospel of Christ. And when Paul perceived that he had faith to be healed – Paul said unto him with a loud voice, stand upright on thy feet. The Bible said he leaped and walked for the first time in his life. Hallelujah!
All the miracles reveal that Jesus is the ultimate healer and that in His name all those who believe shall be healed.

In the book of Isaiah 35:6, the Lord God promised to heal to the lame and it is recorded that they were healed.

What is spiritual lameness?

Spiritual lameness may be called moral impotence, that weakness that keeps all of us from being as healthy and sound in spiritual matters as we ought to be.
When we speak of spiritual accidents we do not mean to imply that sin is excusable and unavoidable. On the contrary, sin does not just “happen” either; there is a specific cause that may begin in carelessness or ignorance.

Regardless of origin or intention, the effect is just as crippling. A sin, and more especially a life of sin, will twist and mangle the finest specimen of moral strength. Traveling toward the Light, men are suddenly struck down with the darkness of sin and carry the scar of the encounter all their lives. It was just for such cripples that Christ came to earth”. quote from the work of o Spencer Miller.

Yes, almost all believers in Christ Jesus suffer spiritual lameness. Yes, let me say this to our face, what is that thing in your church that needs to be done, corrected and you just walked past or ignored? Turning your blind eye to the squirming wretchedness all around you? When did you put out your hand to alleviate it?

This is absolutely true, the worship of God to most of us is a denial of God. It is a useless, blind, formalistic, stupid, heartless thing. It has no power toward God or towards man. It is in ourselves and belonging to ourselves and self alone.

We put on our clothes and parade ourselves to the church on Sunday and to the temple and home, we go. Ignoring whatever is going on in the church and how the church is being organized. Brethren, remember we are supposed to be church builders.

Our history of lameness in Adam starts with the fall and when Adam fell, we all became crippled and lame. Despite our desire, we could no longer walk as we were originally created to do.