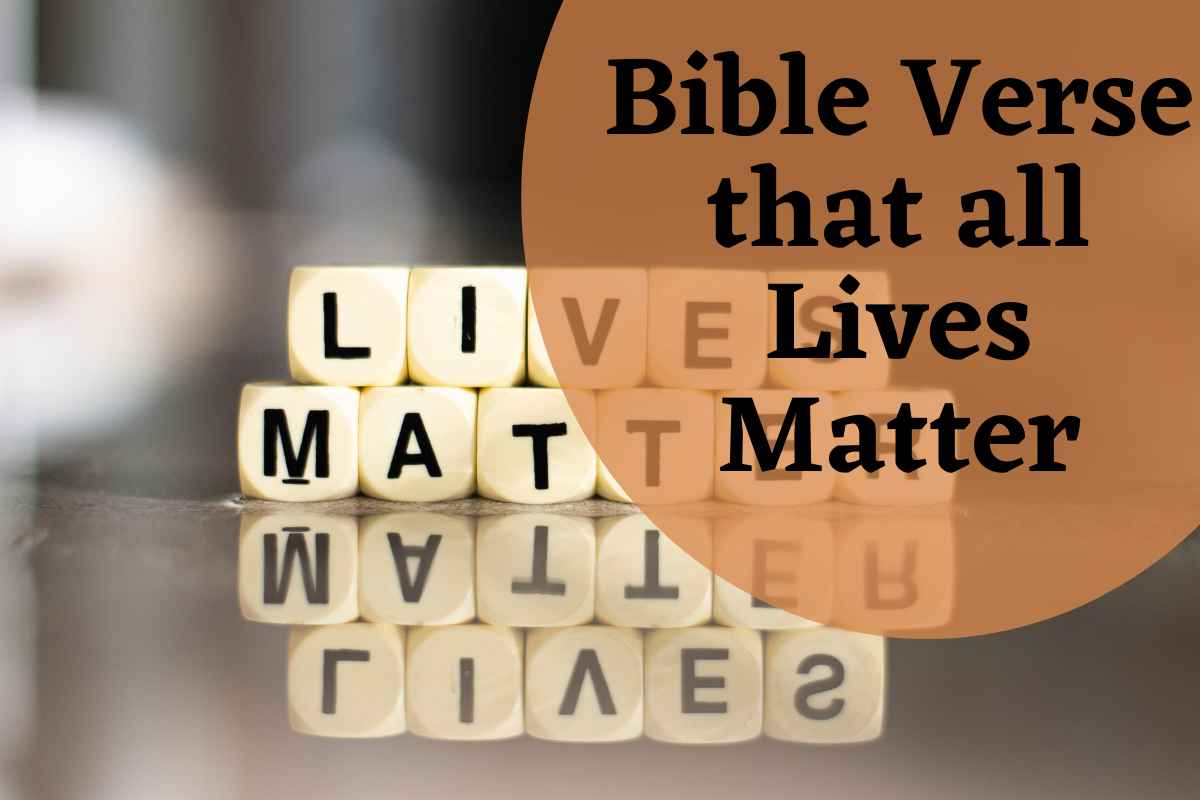 Bible verse that all lives matter

Bible verse that all lives matter tries to explain that God established this bond with people. He created man in His image. The man was made to resemble God to think, talk, and behave as He does. While God reigns in heaven, the man was supposed to have complete dominion on earth.

Bible verse that all lives matter

These verses underscore that all people are fundamentally valuable and worthy, regardless of their circumstances or upbringing. They serve as a reminder that God values every life and that we are all obligated to treat one another with respect and love because we were all made in his image.

Several of the following Bible scriptures could be regarded as reiterating the importance and value of every human life:

is a verse from the Bible’s first book, which relates the creation account. The language of this verse is, “So God made humans in his own image, in his likeness; he formed them male and female.”

This verse is important because it states that God created humans in his likeness. The idea of being created in God’s image is fundamental to how the Bible views people and is referenced frequently in both the Old and New Testaments.

Humans have inherent value and worth because they reflect certain characteristics of God because they are fashioned in God’s image. Intelligence, creativity, moral awareness, and the capacity to love and be loved are some of the traits that we can consider to be in keeping with our creation in the image of God.

In addition, this scripture claims that God made both males and females in his image, demonstrating that both sexes are equally valuable and bear God’s likeness. Given that we are all made in the image of God and should be treated with respect and dignity, this has significant consequences for how we see and interact with one another.

For you created my inmost being; you knit me together in my mother’s womb. I praise you because I am fearfully and wonderfully made; your works are wonderful, I know that full well.

These verses are a section of a longer psalm in which the author considers how closely God is aware of and involved in their existence. The author acknowledges that God was there before they were born and that God was the one who “knit” them together while they were still in the womb.

The author may be aware that they are a marvel and a wonder, created with great care and attention by God, as suggested by the words “fearfully and wonderfully crafted.” The phrase “fearfully” can alternatively be translated as “awe-inspiringly,” which conveys the author’s respect for how God created them.

The overall message of these verses is that God is personally involved in every area of our life, including the creation. They serve as a reminder to

For God so loved the world that he gave his one and only Son, that whoever believes in him shall not perish but have eternal life.

These verses are a section of a longer psalm in which the author considers how closely God is aware of and involved in their existence. The author acknowledges that God was there before they were born and that God was the one who “knit” them together while they were still in the womb.

The author may be aware that they are a marvel and a wonder, created with great care and attention by God, as suggested by the words “fearfully and wonderfully crafted.” The phrase “fearfully” can alternatively be translated as “awe-inspiringly,” which conveys the author’s respect for how God created them.

The overall message of these verses is that God is personally involved in every area of our life, including creation.

Dear friends, let us love one another, for love comes from God. Everyone who loves has been born of God and knows God. Whoever does not love does not know God, because God is love.

The significance of love in the Christian life is emphasized in these lines. Love is a quality that derives from God and is therefore crucial to our relationship with him, according to the first verse, which states that “love comes from God.” The second verse then continues, “everyone who loves has been born of God,” implying that the act of love is evidence that we have a relationship with God and are descended from him.

The third verse implies that love is a necessary component of knowing God by stating that “anyone who does not love does not know God.” This is because God is love, and if we want to know him, we must prioritize love as a fundamental component of our lives.

The phrase “All Lives Matter” is often linked with conservatism and a denial of the viewpoints espoused by supporters of the Black Lives Matter movement, which was founded in reaction to racism and police brutality.

After using the words “all lives matter” at an African-American church in Missouri during her presidential campaign in June 2015, Hillary Clinton, a Democrat, received criticism. But does all lives matter to God, or is God a racist?

For God so loved the world, that he gave his only begotten Son, that whosoever believeth in him should not perish, but have everlasting life.- 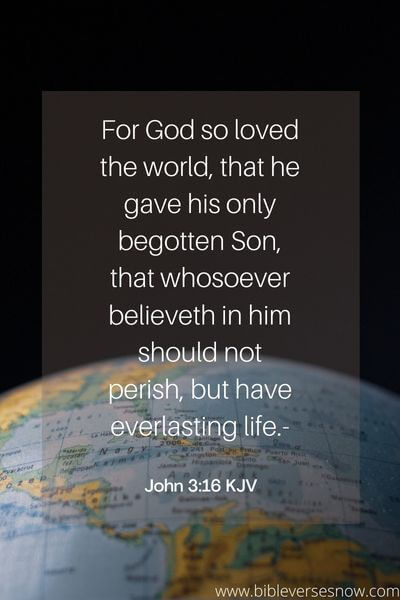 Love is a strong affection for another arising from kinship or personal ties. a warm attachment, enthusiasm, or devotion. Love is rooted as the most accurate way to describe God and Jesus Christ.

This Bible verse tells of God’s love for humanity. God understood that beginning over with the descendants of Noah would not rid the world of wickedness. “The fantasy of man’s heart is wicked from his childhood,” he said, acknowledging the truth of human nature and the power of Satan.

But at this time, He made the decision never again to flood the planet and wipe out all of its inhabitants. Genesis 8:21 quotes God as declaring, “Even if man’s imagination is wicked from his childhood, I will never again curse the land for man’s sake;…’

Bible verse live within your means

Knowing your annual income or hourly rate alone won’t enable you to live within your means. You must be aware of your net income, which is the sum that you must really spend.

It is not possible to live below your means by using credit cards to pay for all of your bills or other living expenditures. Work within budgets, especially in recharging phones.

Let your conversation be without covetousness; and be content with such things as ye have: for he hath said, I will never leave thee, nor forsake thee.- 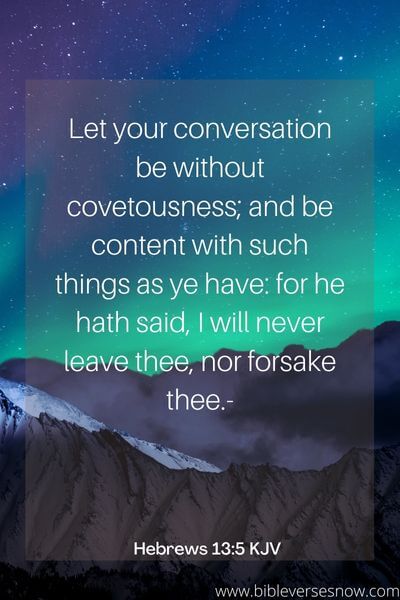 If there is anything in our contemporary time that sponsors crime is covetousness. It is promoted so much on social media. Covetousness means eagerness or excessive desire, particularly for materialism.

Social media frequently promotes comparisons between users, which breeds envy and insecurities. Contentment, which comes from believing in God’s promised provision, is the antidote to the love of money.

Not living above your means being content with who you are, where you are, and what you have. It demonstrates respect for present-day realities.

It involves appreciating what you already have and your current situation. It simply means that you are pleased with your existing situation and have faith that whatever turns your life takes will be for the best. Contentment does not imply the absence of desire.

Bible verses about only living once

The demise of His saints is precious in the eyes of the LORD, you only have one life to live, so try to live it in God’s honor and for His glory. You ought to conduct yourselves such that His name may be honored and you should use your one life to fulfill the reason for which God created you.

And as it is appointed unto men once to die, but after this the judgment:-

The emphasis of the Letter to the Hebrews is on Jesus’ greatness and our obligation to pay close attention to Him. (Hebrews 9) highlights the excellence of Jesus and his function as the mediator of a brand-new covenant that will remain forever.

It is stated by the author of Hebrews near the end of the context that everyone will die once.

What does the Bible say about everyone being important?

The word important according to the Merriam-Webster dictionary means marked by or indicative of significant worth or consequence: valuable in content or relationship: giving evidence of a feeling of self-importance.

He found him in a desert land, and in the waste howling wilderness; he led him about, he instructed him, he kept him as the apple of his eye.- 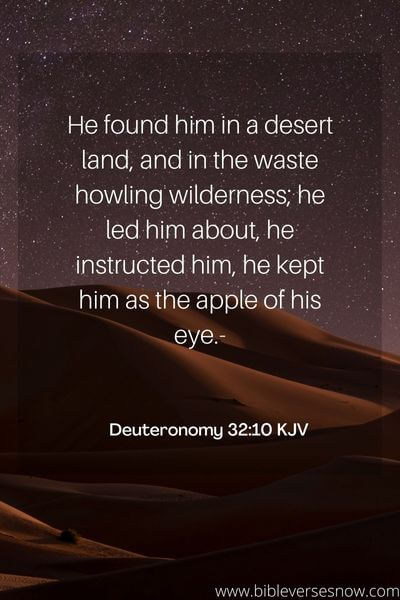 The phrase “the apple of the eye” appears in several Bible texts. Apple can be interpreted in a biblical context as the thing I adore, the thing I hold in the greatest respect, or the thing I love most. The eye is the most sensitive and perhaps valuable organ in the human body.

Before I formed thee in the belly I knew thee; and before thou camest forth out of the womb I sanctified thee, and I ordained thee a prophet unto the nations.- 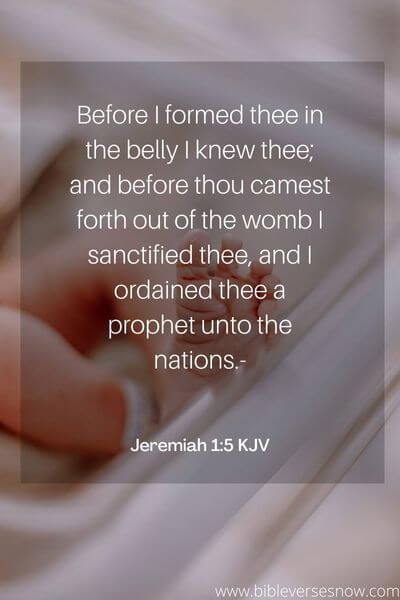 You weren’t only created by God; you were made in his likeness. God intended for you to be a mirror of who He is and how He is. God revealed to the prophet Jeremiah that he had known him from before he was even conceived, sanctified him before he was born, and designated him a prophet to the nations.

Because of his youth, Jeremiah initially lacked confidence, but God urged him to “not be frightened of them, for I am with you to deliver you.” Jeremiah would diligently and in the might of the Lord prophesy to the people in the years to come, doing the task for which the Lord had called him.

Whoever calls on the name of the Lord shall be saved- 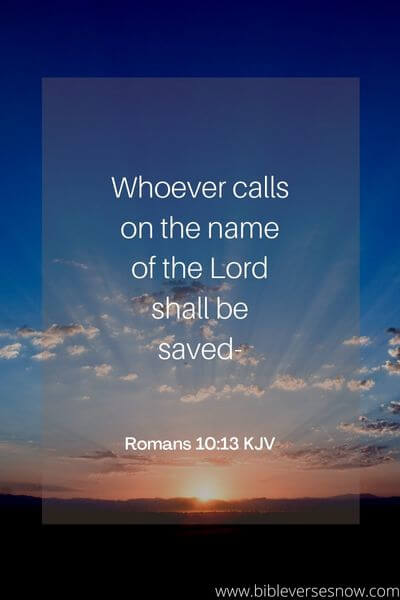 In Romans 10:13, the Bible says ‘whoever calls on the name of the Lord shall be saved”. The word whoever means anyone this accords with Acts 10: 34-35 ‘Of a truth I perceive that God is no respecter of persons: But in every nation, he that feareth him, and worketh righteousness, is accepted with him.’

It tells us we are all important to God. All people, not only Jews, were to receive the gospel. Describe how the phrase “God is no respecter of people” signifies that God will give everyone the chance to experience the rewards made possible by the salvation plan.

Why were the Gentiles portrayed by filthy animals in the dream? Like the animals that the law of Moses prevented Jews from eating, the Jews believed that Gentiles were spiritually filthy.

The Lord was teaching Peter that the gospel should now be taught to everyone when He said that the animals in the dream were now “cleansed.” Because we were made in His image-like Him.

What does God say about living a full life?

For every man, there is a duty-an assignment he must perform in this world. The desire to live is a need for every man. Finding purpose and fulling destiny comes as a call, a hunger just as we’d want to eat. The essence of man is coming to this fulfillment, and this is where happiness lies.

One of the many ways that God created humans differently from other creatures is our desire to live rather than just exist. Since God made us in his image, we were endowed with the capacity for feeling and the desire to learn and grow.

All lives matter to God Bible verseBible verse live within your meansBible verses about only living oncePro-life Bible versesWhat does God say about living a full life?What does Jesus say about our lives?What does the Bible say about everyone is important?
0