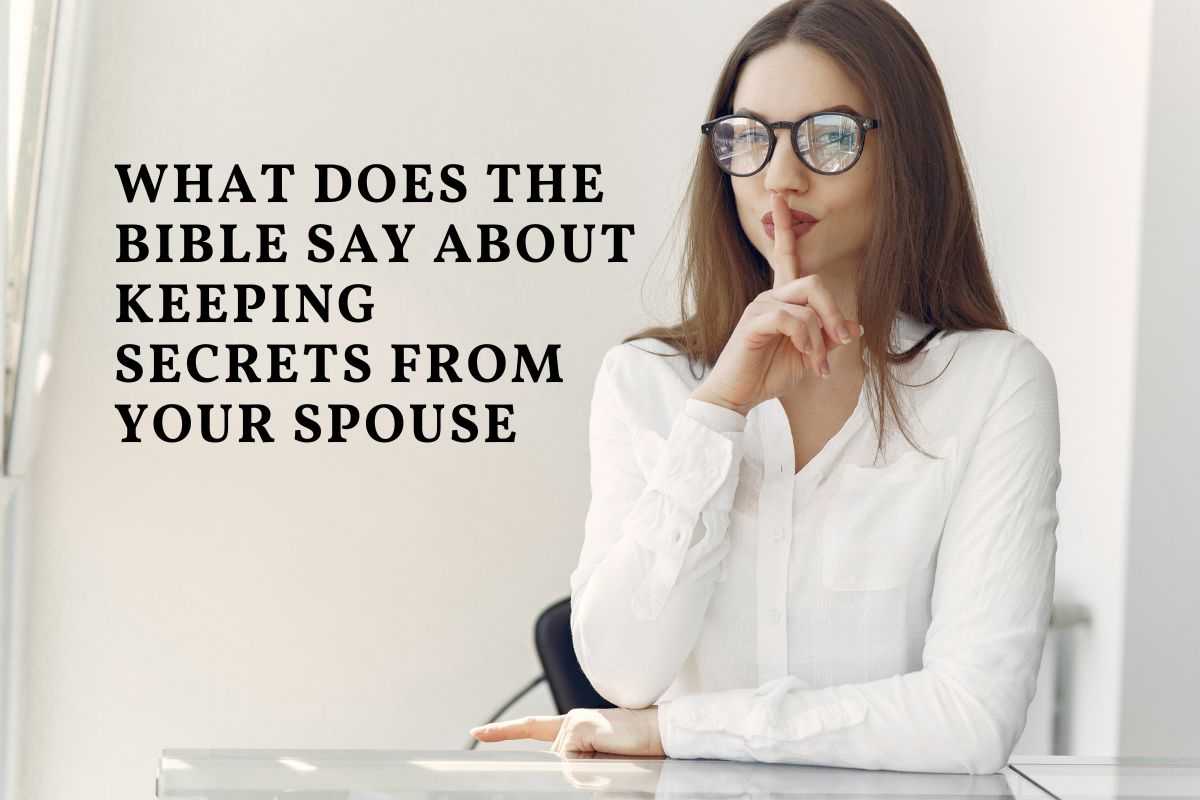 What does the Bible say about keeping secrets from your spouse

Keeping secrets from your spouse is a controversial issue among Christian couples. But what does the Bible say about keeping secrets from your spouse? On one hand, we are taught to be honest in all our dealings with others, especially our spouses. But there are times when the things we keep from our husbands and wives can help them more than they know, and can also protect your relationship and marriage.

What does the Bible say about keeping secrets from your spouse?

There shouldn’t be any unspoken secrets from the past while a couple is dating and later gets engaged. This does not require us to repent of every single sin committed prior to meeting our spouse or fiancé. It does imply, however, that if we have previously been married or have had an affair before being engaged, it is preferable to come clean about it now than having it come to light after the couple has already been wed and leaving one of them feeling betrayed. While certain things are better left unsaid, it is preferable to bring up and discuss significant sins like sexual immorality and having an abortion than to keep them hidden.

No longer do I call you servants, for the servant dies not know what his master is doing; but I have called you friends, for all that I have from my Father I have made known to you.-

This verse of scripture can be used as a guide to determine how much information a couple should reveal. Nothing should be kept a secret from your spouse in a marriage. Your wife is your companion, not a servant.

Some marriage therapists frequently claim that lying is acceptable in a variety of situations. Try telling that to a spouse who has been deceived or who has hid some serious sins from the past or even in their current marriage only to have them discovered. These men and women who don’t have the truth believe that the truth is overrated and that lying isn’t that big of a deal. In such circumstances, lying is useless. I don’t see any justification for lying in a marriage. Because trust is essential to a successful marriage, transparency and trust should be its cornerstones.

Is it OK to keep secrets from your spouse?

We’ll start by emphasizing that critical, difficult realities should be communicated between spouses, even though they may not always need to be thrown at each other in a series of information. It must be revealed, even though it hurts if keeping it a secret could damage or negatively affect your marriage. Likewise, you must under no circumstances act dishonestly.

Job loss, bankruptcy, infidelity, addictions, medical diagnoses, and any other facts that can erode (or worsen the damage done to) your faith in your spouse are a few examples of these kinds of truths. If one partner feels the need to keep things private, even seemingly insignificant but pervasive behavior patterns might lead to issues.

Because they don’t want to bring harm to one another, people frequently withhold important realities from one another. The loss of a job by one spouse, for instance, may be kept a secret from the other. Another possibility is that one spouse made a significant investment using joint funds without notifying the other in order to avoid their partner’s potentially unfavorable reaction. A situation in which one partner had a confirmed illness but kept it a secret from the other, who finally found out after spotting an empty pill bottle in the bathroom trash, led to insecurity in the marriage

What does God say about secrets in marriage?

The longer cancer goes undiagnosed, the more damage it causes, just like secrets concealed from couples. Every successful marriage needs trust and devotion, yet concealed sin destroys the soul and keeps true, honest relationships from developing.

It is impossible to practice self-sacrificial trust and unity, or “oneness,” in a biblical marriage if we keep our distance from one another.

No one among us would deny the fact that the happiest marriages are those characterized by openness, authenticity, and transparency. We would all likely concur that lying and deceit have no place in a marriage when it comes to the major things in life. God made mention that secrets won’t last for long.

What does the Bible say about holding secrets?

Some verses of the bible talks about holding secrets

What does the Bible say about being honest with your spouse?

Jesus saith unto him, I am the way, the truth, and the life: no man cometh unto the Father, but by me.-

As the Truth, according to Jesus, he is. He is the personification of everything that is true, good, and right, and reality is defined by his word and perspective. In contrast, the bible calls the enemy of our souls a liar, the one in whom there is no truth, and one who tempts us to think that we don’t need God and can find life by going our own way independently of God (John 8:44). The truth will release those who adhere to Jesus’ teaching from their servitude to sin, self-rule, and self-justification, according to Jesus, who also claimed that they know the truth.

By being honest, I help others to trust or believe that I’m not concealing, deceiving, or plotting to acquire what I want at your expense. When we don’t act in accordance with our words and maintain our promises, we cause breakups in our relationships. It is traumatizing and unstable to have your trust betrayed in a close relationship. A relationship can, however, be stabilized and eventually mended and renewed when we communicate honestly and keep our promises.

What Does the Bible say about keeping secrets from family members?

Each of us has a shared family heritage. Our social standing is derived from them. We can inherit societal stigma and shame from there as well. Many families have things they’d rather not talk about. We risk unexpected effects if we criticize some aspects of our family’s past. Additionally, it prevents us from coming clean before God by acknowledging and confessing our family’s transgressions.

Even the most famous families in the Bible include examples of family dysfunction.

And Rebekah took goodly raiment of her eldest son Esau, which were with her in the house, and put them upon Jacob her younger son: And she put the skins of the kids of the goats upon his hands, and upon the smooth of his neck-

Betrayal: Jacob was encouraged by his own mother to trick his father into blessing his brother Esau instead of him.

Complicity: King David was complicit in the rape of his daughter Tamar and the murder of his son Ammon because he did nothing to stop or convict his son Absalom for killing his own half-brother, Ammon (2 Samuel 13:1-39)

Drunkenness: While in his tent, Noah showed off his bare body. (Genesis 9:20–21)

Extra-marital affairs: King David had an extramarital affair with Bathsheba, another man’s wife, and did so knowingly.  (2 Samuel 11:1-4)

Incest: Lot had an affair with his own daughters after getting very drunk. (Genesis 19: 30-35)

Biblical history demonstrates how embarrassing family incidents and their repercussions are openly recounted to each succeeding generation as a warning to not fall prey to the same traps. (1 Corinthians 10:6,11-13)

Family members who haven’t been told the truth typically end up questioning what they saw, heard, or felt. This may make them feel rejected, uneasy, and undeserving. Young children typically do so when they detect an air of secrecy, leading them to believe that they may have done something wrong to deserve it.

Over time, this may cause people to feel insecure, afraid, suspicious, and even resentful. When the truth is revealed, there is typically a range of conflicting emotions, including a strong sense of betrayal, distrust, and wrath as well as grief and empathy.

Even though true peace may be the goal, secrets have a way of harming and enslaving all family members concerned.