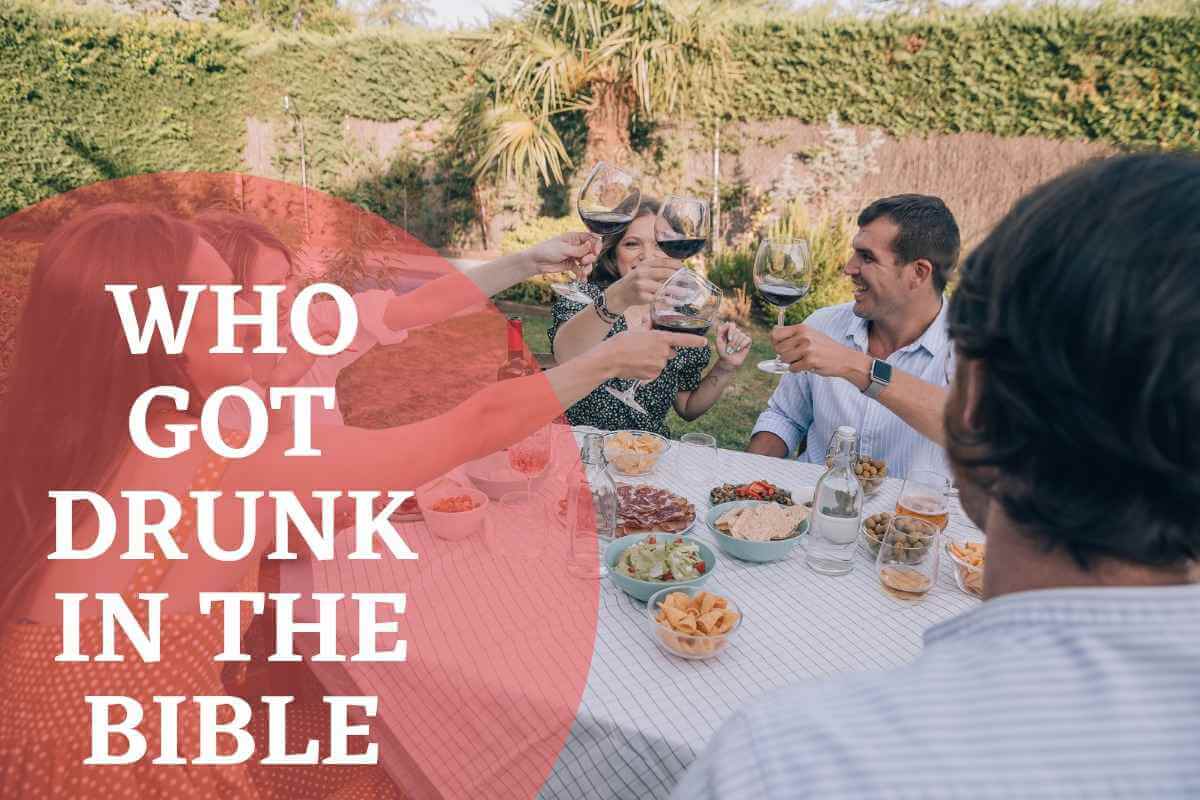 Who got drunk in the bible

There are several instances of individuals getting intoxicated and losing their sense of propriety in the Bible. So I thought it could be interesting to examine some of these accounts in more detail and see if there are any trends that could provide us with information regarding the causes of initial intoxication.

Who got drunk in the Bible?

Man has long been familiar with alcohol. It is one of our favorite drinks, but because of its effects or what it does to the body after ingestion, there are some health dangers. When used sparingly, it has a pleasant taste and is reputed to have medical benefits.
Since there was no modern, advanced medicine back then, the ancients have long used something similar.

Alcohol, in all of its forms, can be a source of embarrassment when drunk excessively because you are sure to get intoxicated and lose control of yourself, in addition to the happiness it brings the consumer.

his prompts us to look at the instances in the Bible where it is said that individuals drank from it. In biblical literature, wine is the most frequently mentioned alcoholic beverage. It is a source of symbolism and played a significant role in daily life in biblical times. Scripture makes mention of beer and wines manufactured from fruits other than grapes that were also consumed by ancient Israelites.

9 Characters Who Got Drunk In The Bible

Noah got drunk, which led to embarrassment and family strife.

Lot was so inebriated that he was unable to control his actions, which resulted in immorality.

Nabal, whose name means “fool or dumb,” passed away during a nighttime drinking binge.

David wanted to atone for his transgression, so he made Uriah drunk.

who was murdered while intoxicated, is mentioned in 2 Samuel 13:28–29.

The Israelite king Elah was about to pass out from intoxication when one of his commanders, Zimri, shot and killed him.

The king provided everyone with as much alcohol as they desired. When he gave the queen the order to arrive, the monarch was inebriated.

Apostle Paul chastises the Corinthians in 1 Corinthians 11:21 for getting wasted on the wine they consumed at their Lord’s Supper celebrations. who in the bible got drunk and slept with his daughters

The man named Lot slept with his daughters after getting drunk with excess wine. In Genesis 19, Lot and his family leave Sodom after being warned by angels that the city and its neighbor Gomorrah are about to be destroyed.

Lot’s wife turns back to look at the destruction despite the angels’ warnings not to, and as a result, she is transformed into a pillar of salt (19:26).
Frightened by the event and now alone with only his two daughters, Lot drives himself and his daughters out of the city of Zoar to which they had fled, and settles them in a cave in the hills far from any form of civilization.

The daughters of Lot resolve to make their father drunk and have sex with him in order to become pregnant because they are worried about their isolation and the chance of saving humanity.

Who was the first person to get drunk in the Bible?

In Genesis 9, Noah, a man of the soil, went on to plant a vineyard. After the Flood, he makes wine from his vineyard and consumes too much of it, passing out in his tent. After consuming some of its wine, he became inebriated and collapsed inside his tent (Genesis 9:20). He is stripped when one of his sons, Ham, notices and informs his brothers, who then cover him with a garment.

The Bible has numerous examples of excessive drinking by people. As long as it is consumed in moderation and does not interfere with one’s obligations, alcohol is not seen as necessarily being bad.

Alcoholism, on the other hand, is viewed as a sin in God’s eyes since it indicates that the drinker has allowed alcohol to supersede both his or her relationships with other people and with God.

Genesis 9:20–21 tells us that after the deluge Noah established a vineyard, made wine, and drank it. In addition to getting intoxicated, he was also naked inside his tent. The sin of Ham then occurred (and possibly Canaan). Even people who have been saved by God’s grace are susceptible to sin, as seen by this difficult moment in Noah’s life (Genesis 8:21).

It also serves as a stark warning about how even the most devout person’s reputation can be ruined by a single careless action. That is especially accurate in the case of drinking. Wine is good for cheer, according to the Bible (Psalm 104:15), yet it can also be deadly, especially for individuals who are.

And wine to gladden the heart of man, oil to make his face shine and bread to strengthen man’s heart.- Psalm 104:15

Did David get drunk in the Bible?

David was a man after God’s own heart. He loved the Lord with all his heart and soul, and he always did what was right in the sight of God. He fought off the armies of the Philistines and brought them down to David’s city of Jerusalem.

The Bible tells us that “David loves the Lord”. This means that even though David did what he thought was best for himself, he still respected God’s authority and followed through with what he believed God wanted him to do.

David was never a lover of wine!

How many times does the Bible mention alcohol?

The Bible mentioned wine several times. Strong wine can also be said to be alcohol. When priests like Aaron and his sons entered the tabernacle to serve the Lord in the Old Testament, they were absolutely barred from consuming alcohol, including wine and spirits (see Leviticus 10:9).

Similarly, Nazarites had a vow that forbade the consumption of wine (see Numbers 6:1-3, 20; Judges 13:4-7).
The Rechabites lived as notable examples of perpetual wine abstinence, carefully following their progenitor Jonadab’s order to do so (see Jeremiah 35:1-8, 14).

Wine is a mocker and beer a brawler; whoever is led astray by them is not wise
Proverbs 20:1

According to Proverbs 20:1, wine mocks its users and rewards them with misery, grief, conflict, and senseless injuries (see Proverbs 23:29, 30). When all is said and done, wine “bite[s] like a snake and poisons like a viper” (verse 32, NIV)

Daniel and his friends set a good example by forgoing the king’s wine (see Daniel 1:5-16). Later in life, Daniel did not drink wine when fasting.

Wine, whether alcoholic or not, is typically referred to as o throughout the New Testament. Jesus compared His radical message to fresh wine that will burst the old bottles of the convention (Matthew 9:17).

In Ephesians 5:18, Paul advised Christians not to get wasted and said deacons should not be “addicted to much wine” (1 Timothy 3:8).

Nevertheless, Paul did advise Timothy to “use a little wine” to treat a digestive condition (1 Timothy 5:23, NIV).

Physical illnesses like dysentery were widespread in those days and were caused by tainted water. So, different methods of relieving thirst were frequently advised.
Some Bible scholars think that Paul was promoting the moderate use of fermented wine for therapeutic purposes in this verse.

Of course, Paul wanted Timothy to be in good physical and mental condition given the demanding responsibilities he had as overseer of the churches in Asia Minor. Physical health and mental and moral awareness are tightly intertwined, and alcohol usage would not be beneficial in either case.

Is getting drunk against the Bible

There are a few stories in the Bible where people get drunk, and it’s actually a bit of a controversial topic. Some people believe that getting drunk is against the Bible, while others say that it’s not a big deal.

What does the Bible say about getting drunk? Well, there are a few different verses that talk about it.

Do not get drunk on wine, which leads to reckless indiscretion. Instead, be filled with the Spirit

Paul suggests that the best way to avoid being wasted is to “be filled with the Spirit.” Focusing on the Spirit can result in a person being filled or controlled by the Spirit, much as excessive wine consumption can do. To be “out of control” in the sense of an extremely charismatic emotional outburst, however, is not what this control or filling entails.

The verses that follow the talk place of singing, praying, exchanging psalms, and surrendering to one another. Living in a way that is worthy of God’s calling means being under the control of the Spirit.

So it seems like the Bible is pretty clear that getting drunk is not okay. But there are also verses that talk about alcohol in a more positive light.

Proverbs 31:4-7, for example, says that “it is honorable for a woman to drink wine and for her husband to praise her. So what’s the verdict, is getting drunk against the Bible? Well, the answer is yes!