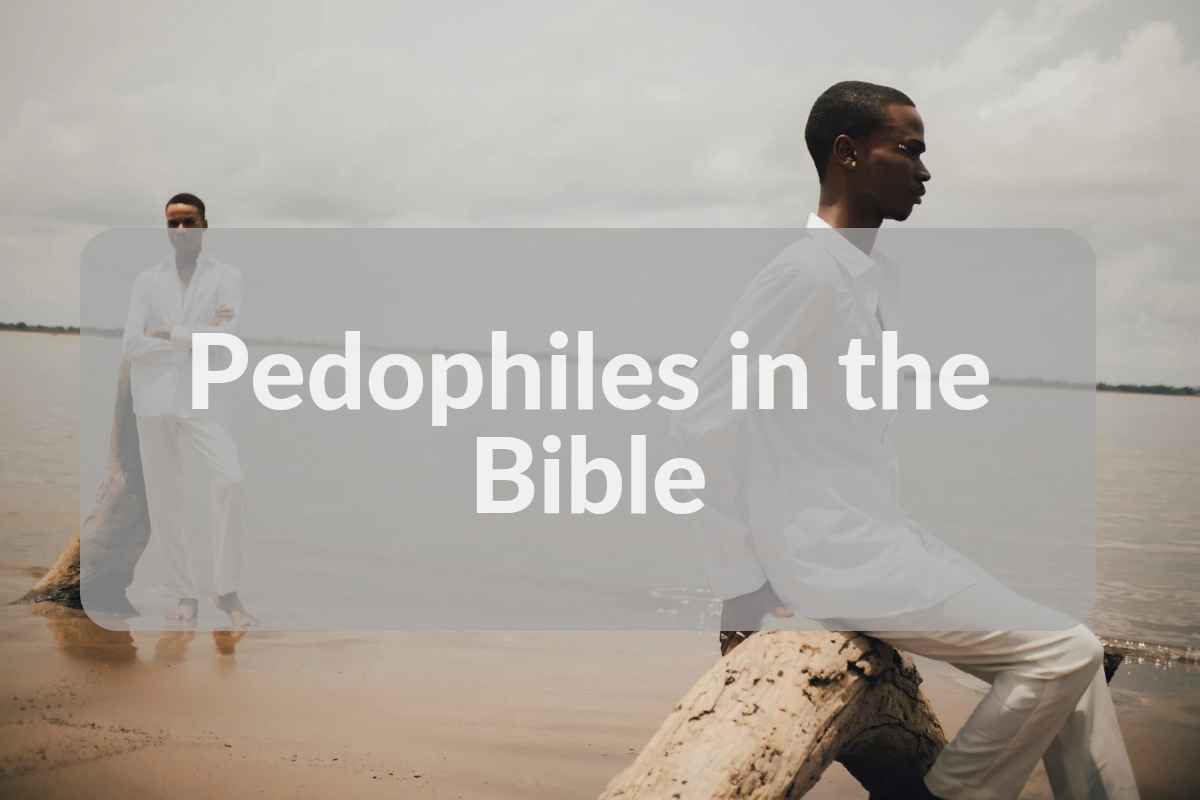 Pedophiles in the Bible

The Scriptures make no direct mention of Pedophiles in the Bible, However, there are some biblical concepts that clearly apply to this sin. The term in Scripture alludes to any illicit sexual behavior, which would have to include the heinous deeds of a pedophile, such as the gathering and sharing of obscene or disgusting images of young children. People who engage in this form of pornography frequently progress from looking to really doing, causing significant harm to children.

Pedophiles in the bible

Pedophiles also spelled as Paedophiles, according to a Wikipedia article is a psychiatric disorders, in which an adult or an older adolescent expresses a sexual desire for a prepubescent which means a child, that is yet to develop any secondary sexual characteristics.

It is a sexual perversion in which children are the preferred objects. These adults are excited about children and fantasize about or engage in sexual acts, including raping or molesting them. Both men and women can be considered pedophiles.

As humans, certain crimes may make the attainment of forgiveness or the extension of God’s grace near impossible. But the truth is that God’s grace is enough for everyone just like it’s enough to acquit us of any crime.

In one way or another the other, we all are sinners and if you are without the grace of God, we all stand condemned.

This is because we have received immeasurable forgiveness and love from our heavenly father and for us to enjoy the full extent of this forgiveness, we must learn to forgive ourselves too for indulging in sexually immoral acts.

When we refuse to forgive ourselves just as God has forgiven us, we can be likened to a man who drinks poison, it will affect and damage our lives like a rapidly spreading cancer. And then, forgive others, especially if in one way or another have been found guilty of child molestation.

Jesus made it explicitly clear that we must forgive those that offend us 70X7 times in Matthew 18:22. In one way or another, we have been in situations where we offended people and asked for forgiveness either from a spouse or family members; friends or co-workers.

The Bible is loaded with many biblical examples of God’s forgiveness for sinners and this includes child molesters. And we are informed again in Ephesians 4:32 that God has forgiven us through Christ and as such, we must forgive one another which only goes to show that our forgiveness by God is deeply rooted in our ability to forgive each other.

This is even more evident in the Lord’s prayer in Matthew 6 where Jesus taught his disciples how to pray.

What does the Bible say about sexual abuse?

Sexual abuse goes beyond the victim to the community. It is a sin of betrayal of trust that destroys relationships between the victims and those who were supposed to be caregivers but harmed them instead.

In fact, abuse of any kind is a sin against God and a desecration of God’s best creation – mankind– who are made in His image. If God would not abuse us, there’s no reason we should abuse anyone, especially sexually because God’s intention for sex was and is still to build intimacy between two legally wedded individuals and not as a tool for oppression and destruction.

Deuteronomy 22:25-29 is one of the passages in the Bible that depicts sexual abuse is seen as a violation of God’s law. It talks about non-consensual sex and the need for the welfare of those who might be violated.

This passage is strongly against sexual abuse as it commands that any man who rapes an engaged lady should be put to death because had intercourse with another man’s betrothed without consent. Also, if the lady is unmarried, he must pay the bride price and should never divorce her. The word of God is just.

The Bible also talks about sexual assault resulting in emotional trauma. 2nd Samuel 13, Hosea 2: 1-13, Jeremiah 13:20-27 and Ezekiel 16 and 23 give us an understanding of the emotional imbalance of the victims and the loss of self-worth they feel afterward.

It also talks about the consequences of indulging in these acts such as attracting the anger of God on the culprits.

Sexual abuse is a common thing in the Bible and the modern world and it makes a complete mockery of the original purpose of sexual relationships.

It is clear from the above passage that sex which is supposed to be an expression of love, union, and peace is now used as an of oppression.

24 For this reason a man shall leave his father and his mother, and be joined to his wife, and they shall become one flesh.

When God said in Genesis said that man should be fruitful and multiply, he intended that the multiplication of offspring was to happen through the God-ordained sexual union between a husband and his wife.

Sexual activities are supposed to be pleasurable and build intimacy in marriage. This was God’s idea for sex. God ordained that through sex two people become one. But in our society today, sex has become a weapon of power that is used against those who are weaker. It has also become a tool for wealth-making as people have gotten involved in all kinds of sexual escapades just to gratify their desires.

And all of these make it seem as though God’s original purpose for sex has been defeated because people both male and female, young and old, rich and poor all engage in sexual activities for the sole purpose of pleasure and fun rather than for the idea of multiplication and intimacy which God had in mind at creation.

The devastating effect of a pedophile or non-consensual sex is the broken trust on the part of the culprit, and then, the victims who are forced to go through the shame, disgrace, and societal embarrassment. Sexual abuse is a sin against God and God is against it. Do not indulge in it.

What does the Bible say about child molesters?

Although there is no direct mention of child molestation in the Bible, it is very clear that God shows special concern for the well-being of children because they are a heritage.

Most persons involved in child molestation have in one way or another experienced a similar thing at a younger age and still feel deeply hurt by those experiences and the damage done to their personalities.

But in as much as the hurts are there, the Bible speaks to everyone using fathers as a symbol in Ephesians 6:4 saying, “Fathers, do not exasperate your children; instead, bring them up in the training and instruction of the Lord.”  In practice, this passage instructs older people to train and not harm younger ones, especially going to the extent of sexual abuse.

Jesus teaches in Matthew 18:1-5 further goes on to show the importance God places on children and the call on every Christian to be like a child because of their innocence and meekness of heart, their inquisitiveness and total dependency on a higher authority, in this case, the authority of God.

Other Bible passages that reference the poor and helpless include Proverbs 14:31; 17:5; 19:17 and no other set of individuals fit into this category better than children.

While some may call it love, molesting a child is a far cry from what love is.

What does the Bible say about pedophiles?

Pedophiles all share the trait of lacking “natural affection”

God works by allowing all forms of sin, including our wicked sexual urges, to be freely expressed in us. He partially shows His fury by giving us what we want and allowing us to experience unpleasant consequences.

People will be lovers of themselves, lovers of money, boastful, proud, abusive, disobedient to their parents, ungrateful, unholy

This has a direct correlation to the concepts of selfishness and arrogance; people who lack gratitude frequently believe they are entitled to certain things and react negatively when they are denied them.

The word translated as “without natural affection” in the Greek language implies “inhuman, unloving, and unsociable.” One who lacks innate affection behaves in ways that are unsocial. Certainly, a pedophile would fit this description.

Age of consent in the bible

Age of consent refers to the age at which a person can legally agree to marriage or sexual activity. There is no particular age of consent in the Bible but the Bible supports the desire to protect children.

In the biblical Hebrew culture, boys of age 13 and above began their apprenticeship with other older men in their families to learn one trade or the other. These boys are considered to be at the age of maturity. That would signal the beginning of learning the trade of their fathers.

This is particularly evident in the life of Jesus in Luke 2:49 when he told His earthly parents, “Did you not know that I must be about my Father’s business?”  Also, girls are considered to be of the age of marriage once they pass the stage of puberty. At this point, she can be betrothed to an older man and when the man is ready for marriage he would pay her bride price.

Child abuse in the Bible

Child abuse in the bible is a topic that few would want to talk about but this can be extremely important if we want to learn what the bible teaches us about child abuse.

In the Bible, there are several instances of child abuse. One instance is described in Genesis 19:8-9. In this passage, Lot’s wife looked back as they fled from Sodom and Gomorrah, and she was turned into a pillar of salt for her transgression. Another example is found in 1 Samuel 3:8-11.

This passage tells us that when David was fleeing Saul and his men, he had to hide out in the cave of Adullam. It also describes how his youngest son died after being beaten by his older brothers for not obeying their orders to bring food to his mother when she was out looking for him (1 Samuel 21:1-4).

Child abuse is not only found in the Bible but there are many other instances throughout the Scriptures that demonstrate that children were abused by adults.

In both the Old and New Testaments, we see examples of parents who intentionally harmed their children. The most common type of child abuse in Scripture is physical abuse, which can be seen through examples such as:

1. Abraham put his son Isaac on a sacrificial altar because he thought God would kill him for his disobedience (Genesis 22:1-21).

3. Herod ordered John the Baptist killed because he did not want anyone to know who his father was (Matthew 14:6-12).

4. King Hezekiah ordered all male babies under one year old killed after they became king so that there would be no more war with Assyria (2 Kings 18:14-16; Isaiah 7:1-9).