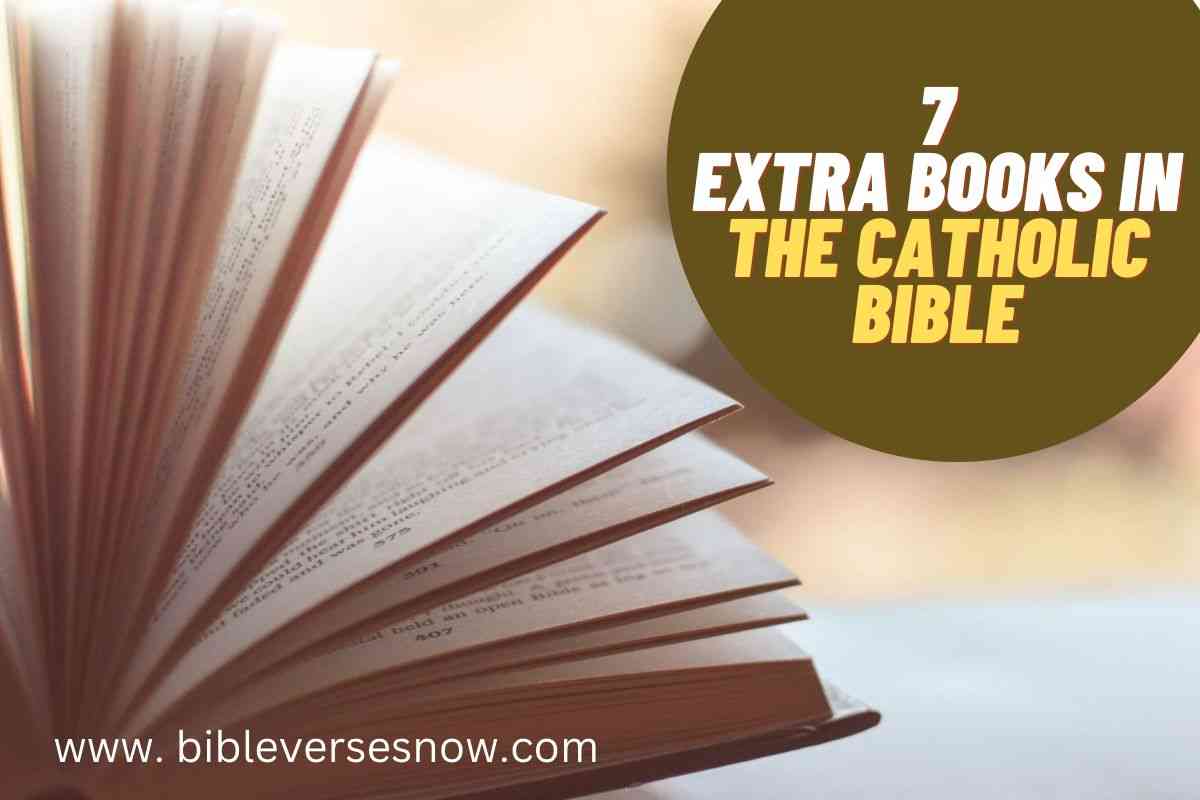 What are the extra books in the Catholic Bible?

What are the extra books in the Catholic Bible?

The term “Catholic Bible” can either refer to a Christian Bible that contains the entire 73-book canon recognized by the Catholic Church, including the deuterocanonical books, those Old Testament books (and portions of books) that are in the Greek Septuagint collection but not in the Hebrew Masoretic Text collection, or it can refer to a Bible that has been authorized for publication in accordance with Catholic Canon Law.


7 books in Catholic Bible not in the Protestant

Catholic Bibles contain seven Old Testament books, but Protestant Bibles do not.
Protestants refer to them as apocryphal (literally, “hidden,” therefore “unknown, spurious”) texts, while Catholics refer to them as deuterocanonical (literally, “second canon”) books.
Baruch, Tobit, Judith, 1 and 2 Maccabees, Wisdom (or Wisdom of Solomon), and Sirach are among these writings (or Ecclesiasticus).

They were incorporated into the Septuagint, a Greek translation of the Old Testament from the third century B.C. that was used by the apostles and generations after them. The deuterocanonical writings are included with the other books in the oldest Greek manuscripts of the Old Testament, such as the Codex Sinaiticus from the fourth century and the Codex Alexandrinus from around 450.

These writings (together with the other 66) were designated as Scripture by regional Church councils held in Hippo (in the year 393), Carthage (397), and Rome (319), supporting what had come to be the accepted doctrine of the entire Church. This canon was established in the sixteenth century by the Council of Trent, an ecumenical body.

How did Protestant Christians misplace these Bible books? Martin Luther, a prominent Protestant reformer, removed them.  Although he claimed that Scripture must be the exclusive authority for Christian belief, he tended to question the validity of the books in which scriptural texts were located when they did not agree with his teaching.

The deuterocanonical writings contain passages that affirm the custom of making sacrifices and prayers for the dead, and thus, the purgatory idea (see 2 Mac 12:39–45). Luther forbade the deuterocanonical texts from being included in the Protestant canon because he disagreed with this traditional doctrine and practice of the Church.
In addition, he denounced the book of James in the New Testament as an “epistle of straw” and refused to remove it from the Protestant canon because it explicitly states, in opposition to Lutheran doctrine, that both faith and deeds are required for salvation (see Jas 2:14–26).

They were written between 300 BC and 100 AD, primarily between 200 BC and 70 AD, before the Christian church and Judaism were clearly divided.

The apostles most commonly referred to and cited the Septuagint, which contains them, even though the New Testament never specifically mentions or quotes from them.
Some claim that there is a connection of ideas, and others observe that phrases from these books are frequently quoted, mentioned, or hinted to in the New Testament numerous times depending greatly on what qualifies as a reference.

Despite the lack of a scientific agreement, some academics believe that the Hebrew Bible canon was determined far earlier than the first century AD, possibly even as early as the fourth century BC or by the Hasmonean dynasty (140–40 BC).

All of the deuterocanonical books were included in the Greek translation of the Hebrew Bible known as the Septuagint, which the early Christian church used as its Old Testament.
The word set these books apart from both the protocanonical (Hebrew canon) books and the biblical apocrypha (books of Jewish origin that were sometimes read in Christian churches as scripture but which were not regarded as canonical).

The following deuterocanonical books are regarded as canonical by the Eastern Orthodox Church and the Catholic Church:

Where did the extra books in the Catholic Bible come from?

A group of writings that are not included in the generally accepted canon of Scripture are referred to as the Apocrypha. It consists of history, short stories, literary works of wisdom, and additions to classic works.

The apocryphal books 1 and 2 Maccabees, 1 and 2 Esdra, Ecclesiasticus, Tobit, and Judith, as well as various additions to the book of Daniel, are included in the Catholic Bible. The process by which the Bible’s books were recognized as authoritative is referred to as canonization. The Catholic Council of Trent came together between 1545 and 1563 to canonize the Apocrypha. Protestant Reformation was largely responsible for this.
Martin Luther started to publicly challenge the Catholic church at that time because several of their traditions, such as prayer for the dead, were not supported by the Bible. By making the Apocrypha canonized, the Catholics gained scriptural backing for this and other distinctively Catholic teachings, including support for praying for the dead.

Catholics claimed that the Apocrypha was truly included in the Greek Old Testament or Septuagint and that the early church fathers regarded the Apocryphal literature as Scripture and utilized it in the public liturgy.

Books in the Catholic Bible not in Protestant

These books are Tobit, Judith, Sirach, Wisdom, Baruch, and the first and second Maccabees.
Additionally, the Bibles used by followers of the Roman Catholic, Eastern Catholic, and Orthodox Churches include slightly longer versions of the Books of Daniel and Esther. Most Christians accepted the earlier Alexandrian canon up to the sixteenth century (list of inspired books).
Martin Luther made the decision to adhere to the more recent Palestinian canon when he translated the Bible into German. This canon only contains books that were written in Hebrew or for which a Hebrew text was accessible in the late first century A.D. On this point, the King James Version agrees with Luther.

Is the book of numbers in the Catholic Bible

These books are Tobit, Judith, Sirach, Wisdom, Baruch, and the first and second Maccabees.
Additionally, the Bibles used by followers of the Roman Catholic, Eastern Catholic, and Orthodox Churches include slightly longer versions of the Books of Daniel and Esther. Most Christians accepted the earlier Alexandrian canon up to the sixteenth century (list of inspired books).
Martin Luther made the decision to adhere to the more recent Palestinian canon when he translated the Bible into German. This canon only contains books that were written in Hebrew or for which a Hebrew text was accessible in the late first century A.D.
On this point, the King James Version agrees with Luther.

Who wrote the 7 extra books in the Catholic Bible?

Prior to the sixteenth century, there was just the Holy Bible, which contained only seven volumes; there was no distinction between the Protestant and Catholic Bibles for the Western Church. This is historical evidence.

The Bible you hold was not personally penned by God but rather by humans under the direction of the Holy Spirit (thank you Mike Maxey for the suggested edit). There have been several people involved in the composition, editing, translation, and transmission of those (and numerous additional) books of the Bible.
From its original form to the format and translation that we have now, scholars just don’t know how many hands have touched it.  How did we, or anybody else, discover that a certain work or book was regarded to be “inspired by God” and added to the Bible canon? A group of Christians, sometimes known as the Church, ALWAYS decided what was inspired
No one individual has ever been given the power to proclaim something canonical on their own.
Since the Council of Carthage in the fourth century, when it was approved by the Pope, the canon that included those seven books had not been severely contested or challenged until the sixteenth century.

why are there 73 books in the catholic bible?

Protestants have 66 Books while the Catholics have 73 books because they ( the protestant) reject the Apocrypha and they hold that the time between Malachi and Matthew was a silent one during which no prophecies were made or prophets existed.
At that time, many people would bring phony books that they claimed were written by Paul or King Solomon, but because it didn’t meet their requirements, protestants didn’t embrace it. Only those books were accepted by protestants, and the Apocrypha does not meet this requirement, which is why it was not introduced in the Hebrew Bible or Protestant and Protestant bible, which is similar to the First Hebrew Bible.
The books should have been written by the LORD himself, or the Big prophets like Daniel and Isaiah should have written them, or it should have been written by the 12 Disciples, or the 70 people who were present at the time of, or they should have seen Christ by themselves.

The Catholic Bible contains 73 Books—66 Books like the Protestant Bible and 7 Apocrypha.

What are the 7 books excluded from the Bible?

In the sixteenth century, Martin Luther was a contentious issue. One Catholic thought Martin Luther was a monster masquerading as a man. One Catholic who initially disagreed with Luther’s theology afterward exclaimed, “He alone is right!”
Almost 500 years later, the judgment is overwhelmingly favorable to the good.
He was correct in a lot of things, and both Catholics and Protestants concur that he altered the course of Western history One of his most crucial acts was to take seven books out of the Bible. He made an effort to delete more than 7. His goal was to have the Bible support his theological beliefs.
He decided to eliminate Hebrews James and Jude from the New Testament, even if it meant eliminating books because they were incompatible with his doctrine that salvation is by faith alone.
What is the reason why Protestants deleted certain books from the Catholic Bible? They didn’t remove anything, they omitted the ‘Old Testament texts that Jews did not include.

What are the seven more books in the Catholic Bible, you may possibly wonder?

The Deuterocanonical Books are those. These include Tobit, Judith, and the Maccabees (1 and 2). Commonly featured are the Wisdom of Solomon and Wisdom of Sirach (also known as Ecclesiasticus).

Luther made an effort to have Hebrews James and Jude removed from the Canon (notably, he saw them going against certain Protestant doctrines like sola gratia or sola fide). But most of Luther’s adherents didn’t agree with his assessment of the situation.